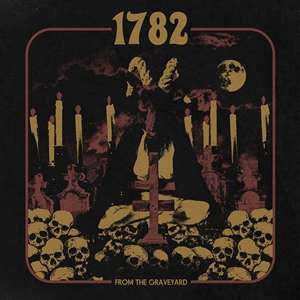 Weitere Ausgaben von From The Graveyard

"From The Graveyard" is the second full length of the Occult Doom band "1782". In this album there is a leap in quality as the production is much better than the previous releases. Eight tracks and 43 minutes of pure dark Doom, with slow and powerful riffs, and heavy and massive drumming. After the recording of "Doom Sessions Vol.2", the band immediately enters the studio and records the heaviest tracks they have done so far, and they have done it while maintaining that catchy state they have always had. Here too there are featurings, Nico Sechi on organ (Hammond in "1782" and "Celestial Voices" in the debut album) and Alfredo Carboni's Synth. As in the eponymous debut album, the artwork was done by the mighty SSCVLT. "From The Graveyard" was recorded, mixed and mastered in November 2020 by Alfredo Carboni at "RKS Studios" in Ossi, Sardinia (Italy).