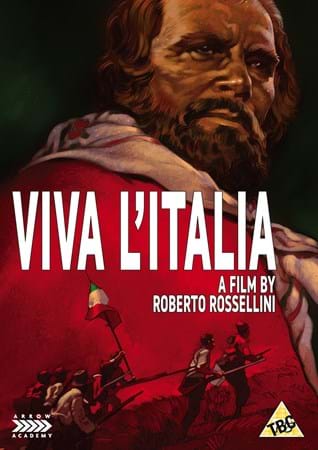 “Viva l’Italia is a documentary made after the event, trying to figure out what happened. I tried to place myself in front of the events of a century ago, the way a documentarist would have done who had the good fortune to follow Garibaldi’s campaign with his camera.” - Roberto Rossellini

To celebrate the centenary of Italy, the Italian government commissioned Rossellini to make a biopic of Giuseppe Garibaldi, one that would follow his exploits with ‘the Thousand’ and their role in the country’s unification. Rossellini approached the film as he had Francesco, giullare di Dio, presenting the main character in neo-realist mode, as though making a documentary.

Brand new 2K restoration from the original negative
Standard definition presentation
Original Italian mono soundtracks with optional English subtitles
Garibaldi, an alternate shorter cut of the film originally prepared for the US market
Brand-new interview with Roberto Rossellini’s assistant on the film, Ruggero Deodato, recorded exclusively for this release
"I Am Garibaldi", a brand-new visual essay by Tag Gallagher, author of The Adventures of Roberto Rossellini: His Life and Films
Reversible sleeve with original and newly commissioned artwork by Sean Phillips