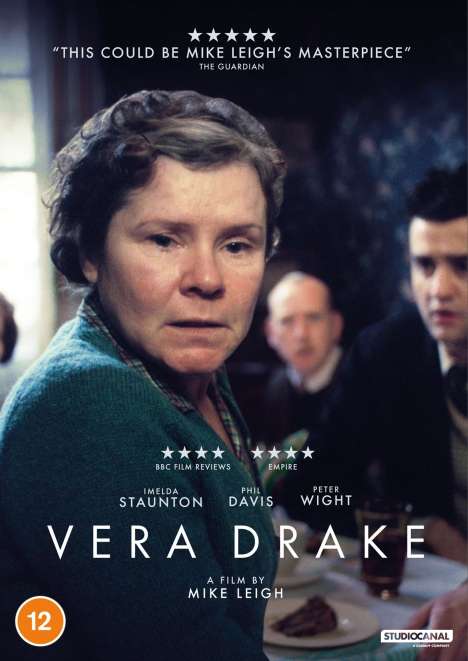 A new restoration of the acclaimed British period drama VERA DRAKE by BAFTA-winning filmmaker Mike Leigh (Happy-Go-Lucky, Another Year, Mr. Turner, Peterloo). London, 1950: Vera Drake (Imelda Staunton) lives with her husband Stan (Phil Davis) and their grown-up children, Sid (Daniel Mays) and Ethel (Alex Kelly). They are not rich, but they are a happy, close family. Vera cleans houses, Stan is a mechanic in his brother's garage, Sid works for a tailor and Ethel works in a factory testing lightbulbs. But selfless Vera has a side-line which she keeps secret from all of those around her: without accepting payment, she helps young women to end unwanted pregnancies. When one of these girls is rushed to hospital following an abortion, the police investigation leads to Vera and her world comes crashing down. With a phenomenal British cast also featuring Sally Hawkins, Eddie Marsan and Jim Broadbent, VERA DRAKE was nominated for three Academy Awards (Best Actress, Best Original Screenplay and Best Director) and won the BAFTAs for Best Original Screenplay and Best Director.