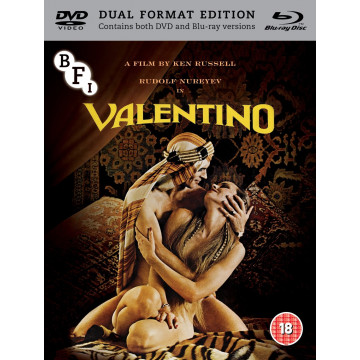 Controversial British director Ken Russell (Women in Love, The Devils) tells the story of one of the silver screen's greatest legends, Rudolf Valentino, in this flamboyant and sexually-charged film.

Starring world-famous ballet dancer Rudolf Nureyev as the adored silent screen actor of the early Hollywood age, Valentino explore the star's humble beginnings as an immigrant in the United States, where he worked for a minimal wage before becoming a New York City gigolo. We then follow him to California, where his good looks allow him to seduce respected actresses. Eventually, his famous lovers help him become a leading man, and he quickly ascends to stardom where he can't escape the media's questions about his past and sexuality.