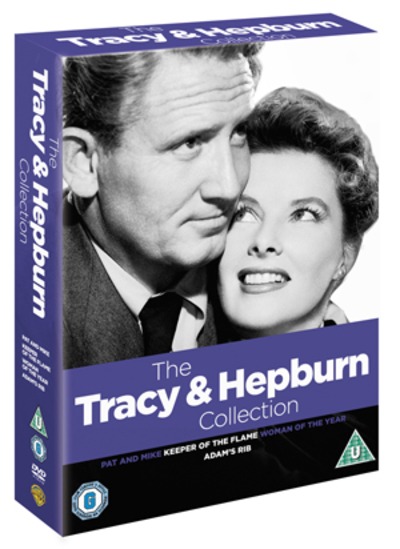 'Woman of the Year' (1942) was the film which united the couple both off screen and on. A high powered political columnist (Hepburn) falls for a lowly sportswriter (Tracy) working on the same paper, even though they are poles aparts socially and intellectually. However, their relationship takes a turn for the worse after they marry, with her unable to adapt to the role of housewife, and him driven to drink by her intransigence. Hepburn won an Oscar for her role.

In 'Keeper of the Flame' (1942) a widely-revered politician dies when his car runs off a bridge. Seasoned hack Steve O'Malley (Tracy) begins researching a biography on the man, and, through the revelations of his widow Christine (Hepburn), uncovers a number of dark secrets about him.

In 'Adam's Rib' (1949) Tracy and Hepburn team up as a married couple finding themselves on opposite sides of a court case.

Whilst in 'Pat and Mike' (1952) Pat Pemberton (Hepburn) is a PE teacher at a southern Californian college, who is persuaded by shady sports promoter Mike Conovan (Tracy) to become a professional athlete. As she flourishes in a number of disciplines, the couple begin to fall in love - although there are plenty of hurdles in the way of their eventual happiness.