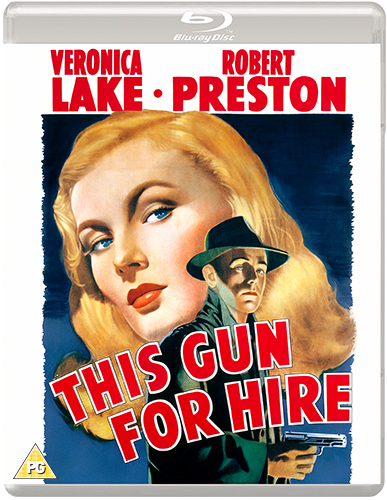 One of the most revered film noir hits of the 1940s, This Gun for Hire was also the debut teaming of Veronica Lake, in one of her sultriest and most iconic roles, and Alan Ladd. Following the success of the film, the duo would go on to team up in several more features, although This Gun for Hire remains their most fondly remembered pairing. Ladd – as a frightening yet oddly sympathetic hit man – was only fourth-billed in this defining early noir, yet it became the breakout role that turned him into a star. As The New York Times said of Ladd upon the film’s 1942 release, “He is really an actor to watch. After this stinging performance, he has something to live up to – or live down.”

Lake is nightclub chanteuse Ellen, and her police detective boyfriend Michael (Robert Preston) is on the hunt for assassin-for-hire Philip Raven (Ladd), after Raven performed a hit on a chemist with a secret formula and a taste for blackmail. When Raven’s employer Gates (Laird Cregar) double crosses him after the job is done, Raven seeks revenge, and his path crosses with Ellen after she is hired to perform at Gates’ club. Raven learns that the stolen formula is for a poison gas that is to be sold to the Japanese, and his pangs of conscience – and revelations of his tortured past – turn Ellen’s fear into compassion, just as dangerous forces close in on Raven. But Ellen is still unsure if Raven can be trusted…

Adapted from Graham Greene’s novel, This Gun for Hire is a stylish wartime espionage noir that was actually in the middle of shooting when the Japanese bombed Pearl Harbor and the U. S. entered the war. Lake and Ladd were such a dynamic pairing that Paramount already teamed them again for the same year’s adaptation of Dashiell Hammett’s The Glass Key before this was even released. In a touch of cinematic irony, The Glass Key had previously been filmed in 1935…by This Gun for Hire director Frank Tuttle (who did not return for the ’42 version).