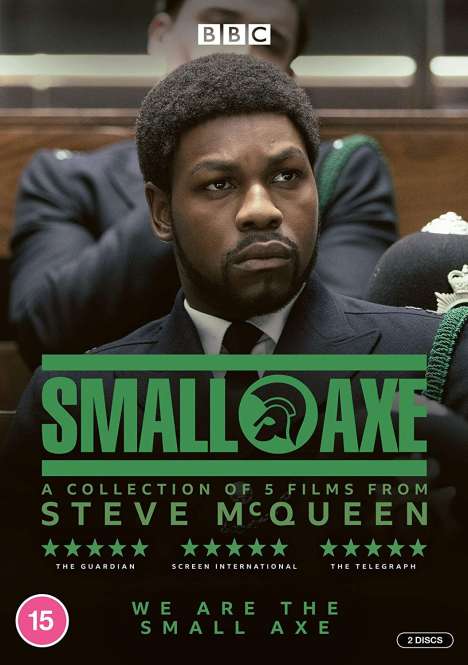 Steve McQueen directs and co-writes a collection of dramas exploring black people's history in London throughout the 1960s and '80s as individuals seek to assert themselves and communities struggle against systemic racism.

In 'Mangrove', based on real events, Frank Crichlow (Shaun Parkes)'s Caribbean restaurant in Notting Hill becomes a vibrant place for the immigrant community to meet, however, with the Metropolitan Police constantly raiding the premises a large number of the local population protest against this discrimination by marching to the local police station. Charged with inciting riots, nine people stand trial where their case becomes a landmark in British history, acknowledging the existence of racism within the police force.

In 'Lovers Rock' the course of a single night is documented as Martha (Amarah-Jae St. Aubyn) attends a house party with best friend Patty (Shaniqua Okwok) and falls for Franklyn (Micheal Ward).

In 'Red, White and Blue' John Boyega stars as Leroy Logan who gave up his career in laboratory science in order to join the police force as a result of witnessing his father (Steve Toussaint) being assaulted by racist officers. However, tensions arise when young Leroy shares his career change with his friends and family, and despite his capability in the role Leroy still finds himself subjected to prejudice by his colleagues.

In 'Alex Wheatle' Sheyi Cole stars as author Alex Wheatle in his formative years as he finds a sense of community and belonging in Brixton having been brought up in institutional care.

Finally, in 'Education' young boy Kingsley (Kenyah Sandy) finds himself removed from class despite his aptitude for learning. With his parents too busy working separate jobs to pick up on the educational neglect of their son, three women attempt to address the school's segregation policy on Kingsley's behalf.

Set from the late 1960s to the mid-1980s, the films each tell a story involving London’s West Indian community, whose lives have been shaped by their own force of will, despite rampant racism and discrimination. Even though this collection of films is set some decades ago, the stories are as vital and timely today as they were for the West Indian community in London at the time. Small Axe is a celebration of Black joy, beauty, love, friendship, family, music and even food; each one, in its own unique way, conveys hard-won successes, bringing hope and optimism for 2020.

Steve McQueen explains: “The seed of Small Axe was sown 11 years ago. Initially, I had conceived of it as a TV series, but I realised these stories had to stand alone as original films, yet at the same time be part of a collective. The anthology, anchored in the West Indian experience in London, is a celebration of all that that community has succeeded in achieving against the odds.

"Although all five films take place between the late 1960s and mid-80s, they are just as much a comment on the present moment as they were then. They are about the past, yet they are very much concerned with the present. A commentary on where we were, where we are and where we want to go.”