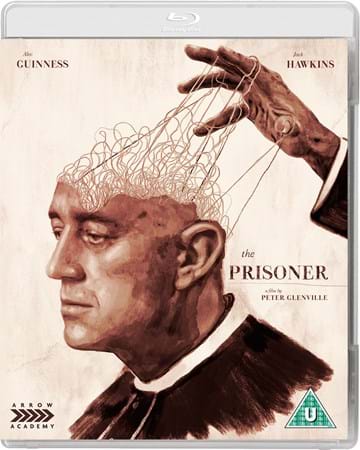 Banned from the Cannes and Venice Films Festivals for being anti-Communist and excoriated elsewhere as pro-Soviet propaganda, Peter Glenville’s The Prisoner stoked controversy at the time of its original release and remains a complex, challenging and multifaceted exploration of faith and power.

In an unnamed Eastern European capital, an iron-willed Cardinal (Academy Award®-winner Alec Guinness, The Ladykillers) is arrested by state police on charges of treason. Tasked with securing a confession from him by any means necessary is a former comrade-in-arms from the anti-Nazi resistance (Jack Hawkins, The Bridge on the River Kwai). Knowing the Cardinal will never fold under physical torture, the Interrogator instead sets out to destroy him mentally, breaking his spirit rather than his body.

Adapted by acclaimed playwright Bridget Boland (Gaslight) from her own stage-play and showcasing powerhouse performances by two actors at the height of their game, The Prisoner is a tense, thought-provoking and disturbing drama about the endurance of the human spirit.