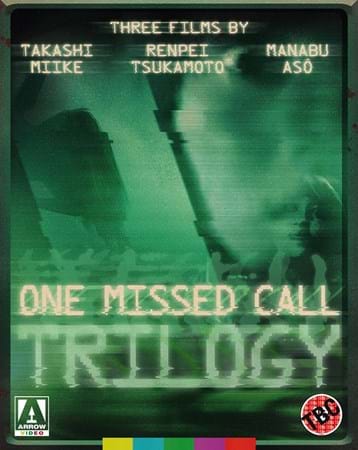 An iconic trilogy of J-horror films comes to Blu-ray for the first time! Tapping into the same brand of terror as the Ring and Grudge movies, visionary director Takashi Miike (Audition, Blade of the Immortal) presents a modern, high-tech twist on that mainstay of Japanese folklore, the yurei or vengeful spirit, in the form of its own iconic antihero – the terrifying Mimiko.

In the first instalment in the trilogy, 2003’s One Missed Call, student Yoko (Anna Nagata, Battle Royale) receives a phone message from her future self, ending with her own death scream. Two days later, she dies in a horrific rail collision. As the mysterious phone curse spreads, claiming more young lives, Yoko’s friend Yumi (Ko Shibasaki, Battle Royale, 47 Ronin) joins forces with detective Hiroshi (Shinichi Tsutsumi, Space Battleship Yamato), whose sister met the same gruesome fate. But can they unravel the mystery before the clock runs out on the next victim – Yumi herself?

Mimiko’s curse continues to wreak bloody havoc in two sequels – 2005’s One Missed Call 2 and 2006’s One Missed Call: Final, in addition to spawning a TV series and an American remake. This lavish collection from Arrow Video gathers together the original trilogy – with the third instalment making its UK debut – and a swathe of in-depth bonus features for the ultimate spine-tingling experience.