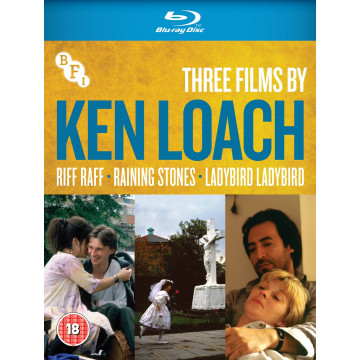 Ken Loach is arguably Britain’s most lauded director of the last 30 years. This collection contain three films that are emblematic of the acclaimed filmmaker’s talent for engaging with social injustice and contemporary politics in stories by turns funny, heartbreaking and harrowing.
Special features include filmed interviews with Ken Loach and the documentary Carry on Ken.

In Riff-Raff, Glaswegian jailbird Stevie (Robert Carlyle) heads to London to find work but discovers a world of corruption and degradation. Inner-city poverty is brought to the fore in Raining Stones, as unemployed Bob's (Bruce Jones) desperate attempts to afford a communion dress for his daughter result in a succession of disasters. Inspired by real events, Ladybird Ladybird is the emotional story of a woman's fight to hold on to her children and her relationship in the face of bureaucratic interference.