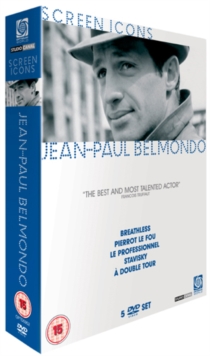 'Breathless' (1960), is Jean-Luc Godard's groundbreaking tale of the brief love affair between petty criminal Michel (Belmondo) and young American student Patricia (Jean Seberg). Michel has killed a motorcycle cop and is now hiding out in Patricia's Paris apartment, but the police are getting closer, and as Michel falls deeper in love with Patricia, his time also gets shorter and shorter. Godard's film, one of the first and most important statements of the French New Wave, caused a revolution in the way films were made, opening up many new, previously untried possibilities for cinema.

'Pierrot Le Fou' (1965), is one of Godard's best films in which Ferdinand (Belmondo) leaves his wife and child and runs off with the babysitter Marianne (Anna Karina). The pair head south to find Marianne's brother, Ferdinand gets caught up in Marianne's crimes along the way as the pair spiral towards destruction. Memorable for Raoul Coutard's deep and lush photography, it offers a spontaneous musical sequence under the pine trees, elements of the gangster genre and a tragic account of the transience of love, meanwhile Godard manages to address the nature of the film medium itself.

In 'Le Professionnel' , Belmondo plays French secret agent Joss Beaumont, sent to Africa to assassinate a head of state. Before he can complete his task however, the political climate changes, meaning Beaumont is sacrificed to the authorities and jailed. After escaping, he returns to France, warning his old superiors that he intends to complete his mission when the African leader arrives on a state visit.

In 'Stavisky' (1974), Belmondo plays the French con-man extraordinaire, who managed to charm his way into the highest strata of French society, mainly on the back of phony bonds. Set in the period prior to WWII, the resulting financial scandal shook national confidence and came close to ending in civil war.

Set in the vineyards of Provence, 'A Double Tour' (1959), concerns the death of Leda (Antonella Lualdi), who is having an affair with her neighbour, the local Patron, Henri Marceaux (Jacques Dacqmine). Henri's son and wife are both aware of the affair, indeed the son has been sampling Leda's charms for himself. Belmondo himself plays an Hungarian idler, the admirer of Henri's daughter (Jeanne Valerie).