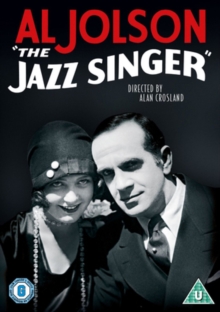 Hair
DVD
EUR 5,99*
Al Jolson stars in this film of a play purportedly based on his own life.

He plays Jakie Rabinowitz, a singer trying to make a career on Broadway instead of following the wishes of his Rabbi father to replace him as the Synagogue Cantor. Jakie breaks with his father, becomes Jack Robin and gets on Broadway, only to be called to his father's death-bed on opening night.
The film co-stars Warner Oland, May McAvoy, and Eugenie Besserer.
Among the hit songs featured are Jolson's trademarks, 'Toot-Toot-Tootsie', 'Goodbye', 'Dirty Hands', 'Dirty Face', 'My Mammy', and a then-new song composed by Irving Berlin, 'Blue Skies'.