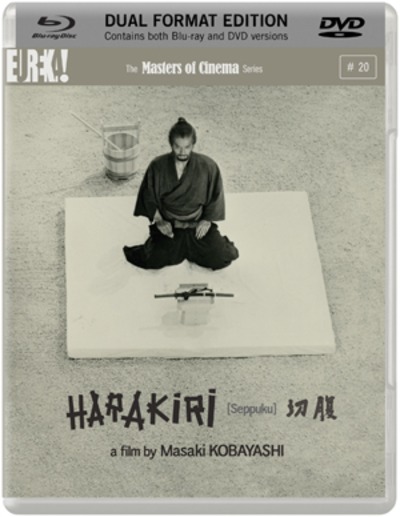 Of all Masaki Kobayashi’s attacks on the cruelty and inhumanity perpetrated by authoritarian power (including The Human Condition and Samurai Rebellion), perhaps none are more brilliant than his visceral, mesmerising Harakiri [aka Seppuku].In a magnificent performance, Tatsuya Nakadai (Yojimbo, The Face of Another, Ran) stars as Hanshiro Tsugumo, a masterless down-and-out samurai who enters the manor of Lord Iyi, requesting to commit ritual suicide on his property.

Suspected of simply fishing for charity, Hanshiro is told the gruesome tale of the last samurai who made the same request – but Hanshiro will not be moved… With its intricate structure and pressure-cooker atmosphere, Kobayashi’s first jidai-geki period drama is a full-scale demolition job of samurai ideals and feudal hypocrisy, filmed with artistry and surgical precision, and scored by celebrated composer Toru Takemitsu.

Adapted from the same source novel in 2011 by notorious auteur Takashi Miike, the original – winner of the 1963 Special Jury Prize at Cannes – still stands as a startling moment in Japanese cinema.