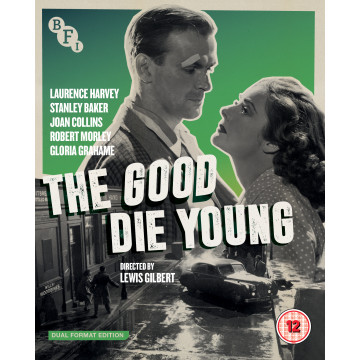 The Good Die Young opens with four men sitting in a car as they prepare to commit a serious crime. Each man’s reason for being involved is then explored…

Mike (Stanley Baker), an injured and ageing boxer unable to find work, Joe (Richard Basehart) is an out-of-work clerk who needs to get to the United States with his young wife (Joan Collins) to escape her unstable mother (Freda Jackson), Eddie (John Ireland) is an AWOL American airman with an unfaithful wife (Gloria Grahame), and Miles 'Rave' Ravenscourt (Laurence Harvey), a 'gentleman' scoundrel with gambling debts and the man who lures the other three.

From director Lewis Gilbert (The Spy Who Loved Me, Alfie) comes this 1954 crime thriller that promises “Deadly weapons, burning lips, and hot lead!”