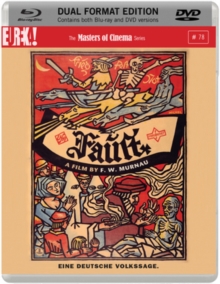 Murnau’s last German film features astonishing photography, magnificent art direction, and special effects which retain the power to amaze. Freed from the constraints of psychological narrative, Murnau’s mastery of cinematic technique places Faust at the pinnacle of the silent era, its barrage of visceral and apocryphal imagery contrasting with the simplicity and directness of its spiritual theme.
In collaboration with the screenwriter Hans Kyser, Murnau fused Faust’s script from German folk legend and the works of Goethe, Gounod, and Marlowe (particularly using the latter’s tone). Faust’s tale is a classic one of a man who sells his soul to the devil. In an attempt to gain control of the Earth, Mephisto (Emil Jannings) wagers an angel (Werner Fuetterer) that he can corrupt the soul of the elderly professor Faust (Gosta Ekman). As the Horsemen of the Apocalypse ride demonically through the sky, Mephisto towers over Faust’s hometown unleashing a plague that spreads amongst its inhabitants. Faust, unable to find a cure for the citizens who are dropping dead around him, renounces both God and science invoking the aid of Satan through a mysterious book that he chances across.
Murnau, a perfectionist, shot multiple takes of each scene with only prime takes making the final German domestic cut of Faust. Only the prints made for export outside Germany were seen until recently, indeed this version was at one time thought to be the only version (it used discarded takes, errors, less impressive special effects, and human stand-ins for real animals). Using the nitrate duplicate negatives printed by UFA in 1926 (and an array of international sources) Murnau’s favoured domestic German version of Faust has now been meticulously reconstructed by Luciano Berriata for Filmoteca Espanola from which this newly restored transfer is sourced. The Masters of Cinema Series is extremely proud to be able to present the original German domestic cut of Faust for the first time in high definiition in the UK.

Gorgeous 1080p transfer of the domestic German print, with original German intertitles and optional English subtitles
Full-length audio commentary by critics David Ehrenstein and Bill Krohn
A 20-minute video piece with critic Tony Rayns discussing the film
An orchestral score by Timothy Brock, plus a specially commissioned harp score by Stan Ambrose
New piano score by Javier Pérez de Azpeitia (Blu-ray only)
The complete export version of the film
The Language of Shadows, a 53-minute documentary on Faust (Blu-ray only)
Video comparison of the domestic and export versions of the film

44-PAGE BOOKLET containing an essay on Faust by writer Peter Spooner, a new translation of excerpts of Éric Rohmer’s brilliant treatise on the film, and rare archival imagery.