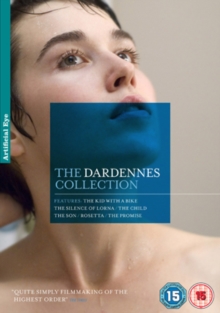 Collection of six features from acclaimed filmmakers the Dardenne brothers.

In 'The Kid With a Bike' (2011), an eleven-year-old boy is in search of a family.
In an attempt to escape the state-run care home he has ended up in, rebellious pre-teen Cyril Catoul (Thomas Doret) tries without success to track down his deadbeat father; and in the process, he meets small-town hairdresser Samantha (Cécile De France).
In 'The Silence of Lorna' (2008), Arta Dobroshi stars as Lorna, a young Albanian woman stuck in a marriage of convenience with junkie Belgian Claudy (Jérémie Renier).
It turns out that this is a strategic marriage set up by a Russian gangster, and that the eventual plan is for Claudy to be murdered and Lorna to then re-marry the gangster.
In 'The Child' (2005), Bruno (Renier) is a young petty thief who has fathered a baby by his 18-year-old girlfriend, Sonia (Déborah Francois).
Needing money, Bruno commits a shocking atrocity and its repercussions force him into a desperate search for atonement.
In 'The Son' (2002), a middle-aged carpenter (Olivier Gourmet) takes on a young apprentice, Francis (Morgan Marinne), knowing that he is the murderer of his son.
In 'Rosetta' (1999), the teenage titular character (Emilie Dequenne) struggles to look after herself and her alcoholic mother on a caravan site in present-day Belgium.
When she is made redundant, Rosetta befriends waffle salesman Riquet (Fabrizio Rongione) and manages to find another job, but this does not last long, and she eventually finds herself considering suicide as a means of escape.
Finally, in 'La Promesse' (1996) 15-year-old Igor (Renier) helps his father, Roger (Gourmet), employ illegal immigrants to work on building sites.
When one of the workers is seriously injured after a fall from some scaffolding, Igor promises to look after the man's wife (Assita Ouedraogo) and child; an encounter which gradually shows him the gulf between his own values and those of the workers.