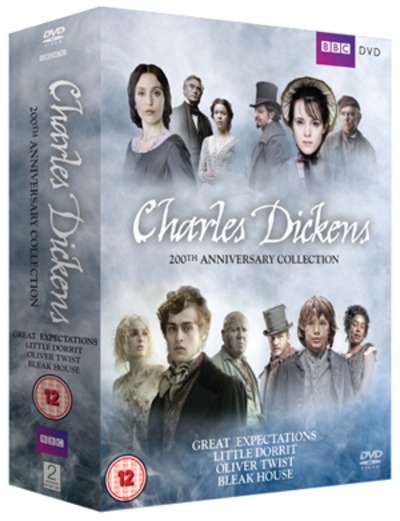 In 'Great Expectations' (2011) eleven-year-old Pip (Oscar Kennedy) encounters escaped criminal Magwitch (Ray Winstone) while out on the marshes and, out of fear, helps him, an event which will shape both of their futures. When the wealthy Miss Havisham (Gillian Anderson) seeks the presence of a boy at her grand house, Pip is sent to her and becomes a playmate for her adopted daughter, Estella (Isobel Meikle-Small / Vanessa Kirby). As a young adult, Pip (Douglas Booth) learns that he will receive an inheritance from a mystery benefactor when he turns 21. Now under the guardianship of lawyer Jaggers (David Suchet), Pip moves to London where he hopes to become a gentleman worthy of Estella's love.

In 'Little Dorrit' (2008) the Dorrit family has spent years in a debtors' prison due to the financial mess in which father William (Tom Courtenay) managed to land himself as a youth. Youngest daughter Amy (Claire Foy), known as Little Dorrit, finds work with the wealthy Mrs Clenham (Judy Parfitt) but knows that her father will, in all probability, spend the remainder of his life in gaol. However, when Arthur Clenham (Matthew Macfadyen), recently returned from abroad, comes to suspect that his late father was in part responsible for the Dorrits' plight, he becomes determined to make amends. But as he continues to delve into the mysteries of the Dorrits' and his parents' shared past, he is unaware that his own mother's house has been placed in peril by the arrival of a sinister stranger.

In 'Oliver Twist' (2007) Oliver (William Miller) is born into a life of seemingly hopeless poverty. Escaping the cruelty of the workhouse he has grown up in, the young orphan makes his way to London where he meets a gang of pickpockets, led by the charismatic Fagin (Timothy Spall), and receives the first warm welcome of his life - unaware that this kindness comes at a price. When he is mistakenly taken as a thief, the wealthy victim, Mr. Brownlow (Edward Fox), brings Oliver to his home and shelters him but evil lurks on the horizon in the form of Fagin's associate, the ruthless Bill Sykes (Tom Hardy).

In 'Bleak House' (2005) high and low life in Victorian London is explored to the full when young Richard Carstone (Patrick Kennedy) and his cousin, Ada (Carey Mulligan), are caught up in the interminable legal case of Jarndyce vs Jarndyce. Drawn into a world where the icy and composed Lady Dedlock (Anderson) hides a dark secret, and where their lives will be affected by the attentions of their friend, Esther (Anna Maxwell Martin), their guardian, Mr John Jarndyce (Denis Lawson), and the predatory attentions of various unscrupulous lawyers, boarding house owners and debt collectors, the two young cousins will each meet with very different ends as the case approaches its long-delayed conclusion.