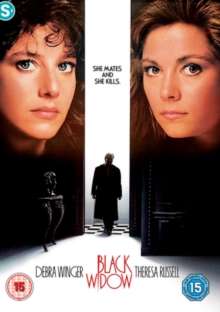 An FBI agent engages in a battle of minds with a woman she suspects of multiple murders in this thriller from director Bob Rafelson.

Investigator Alexandra Barnes (Debra Winger) becomes obsessed with proving glamorous socialite Catharine Petersen (Theresa Russell) is a murderess responsible for the deaths of several millionaires who died suspiciously soon after marrying. Believing her to have assumed a new identity each time, Agent Barnes sets out to prove her suspicions are true, but soon finds that she too is falling under the Black Widow's spell.