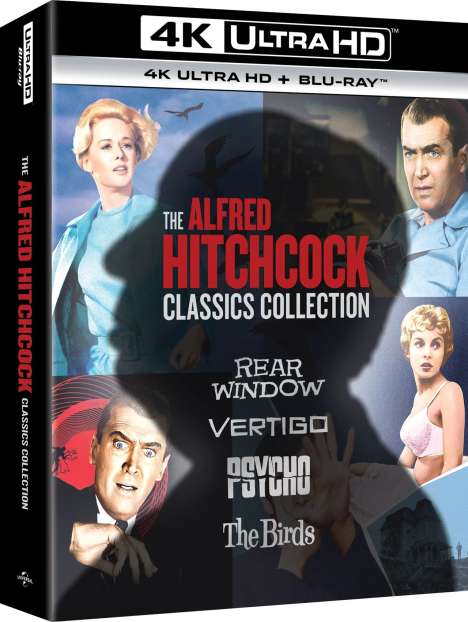 Universally recognized as the Master of Suspense, the legendary Alfred Hitchcock directed some of cinema’s most thrilling and unforgettable classics. The Alfred Hitchcock Classics Collection features four iconic films from the acclaimed director’s illustrious career including Rear Window, Vertigo, Psycho and The Birds in stunning 4K resolution. Starring Hollywood favourites such as James Stewart, Grace Kelly, Anthony Perkins, Janet Leigh, Tippi Hedren, Kim Novak and Rod Taylor, this essential collection features hours of bonus features as well as the original uncut version of Psycho for the first time ever.

PSYCHO UNCUT: The extended version of the movie as seen in theaters in 1960 is exactly as intended by Alfred Hitchcock and now available with additional footage for the first time ever
PSYCHO: The most widely seen version of the movie was edited for content and subsequently used for TV broadcasts, theatrical re-releases and home entertainment over the last 60 years