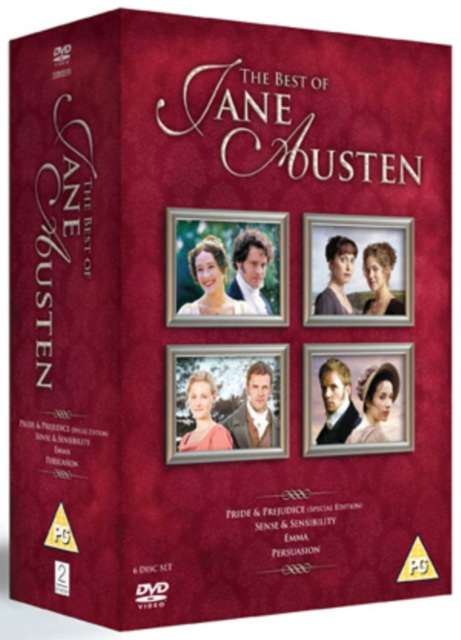 Four BBC adaptations of the novels of Jane Austen.
Andrew Davies's 1995 adaptation of 'Pride and Prejudice' starring Jennifer Ehle and Colin Firth was the BBC's flagship drama in the Autumn 1995 schedule. The story revolves around the arrival of the wealthy Mr Darcy (Firth) and party, and the excitement this causes amongst the five daughters of the Bennett family.

Andrew Davies also penned the adaptation for 'Sense and Sensibility' (2008).
Marianne Dashwood (Charity Wakefield) wears her heart on her sleeve when she falls in love with the charming but unsuitable John Willoughby (Dominic Cooper), ignoring her sister Elinor (Hattie Morahan)'s warning that her impulsive behaviour leaves her open to gossip and innuendo. Elinor, sensitive to social convention, struggles to conceal her own romantic disappointment, even from those closest to her. Will the sisters learn that sense must mix with sensibility if they are to find personal happiness in a society where status and money govern the rules of love?

Romola Garai stars as matchmaker Emma Woodhouse in 'Emma' (2009).
Despite the protestations of Mr Knightly (Jonny Lee Miller) for her not to become involved, Emma's meddling has unforeseen effects when she persuades her young friend Harriet Smith (Louise Dylan) to reject the advances of a local farmer in favour of the dashingly eligible Mr Elton (Blake Ritson).

In 'Persuasion' (2007), Anne Elliott (Sally Hawkins) has spent years regretting her rejection of Captain Wentworth (Rupert Penry-Jones)'s proposal of marriage, her family having been against the match on grounds of class. When he returns from sea they meet but, instead of finding romance, are kept apart through a series of misunderstandings. Anne is being pursued by her cousin, Mr Elliott (Tobias Menzies), while Captain Wentworth is regarded as a very eligible bachelor and has a stream of young women with marriage in mind beating a path to his door.