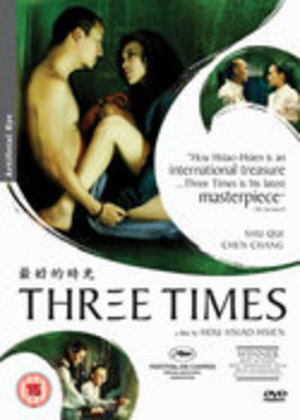 The great Taiwanese director Hou Hsiao-Hsien’s latest work, THREE TIMES, is a beautiful and lyrical film, regarded by some critics as the best film shown at last year’s Cannes Film Festival. It features two of Asia’s biggest stars, Shu Qi and Chang Chen. They play different characters in three episodes set in different years and different eras, 1966, 1911 and 2005. The central theme is love and emotion: in this film Hou Hsiao-Hsien is commenting on our different expressions of love in different times.

Episode 1 1966, Kaohsiung: A Time For Love (‘Lian’ai meng’)
Chen (Chang Chen) meets May (Shu Qi), who works at his favourite pool-hall. They play pool together, soon after he enlists for national service. On a day-release from the army, Chen comes to visit her, but he finds out that she has quit her job and no one knows where she’s gone…

Episode 2 1911, Dadaocheng: A Time For Freedom (‘Ziyou meng’)
The owner of a tea plantation and his son discuss buying out a young courtesan’s contract. Finding out that the son has got her pregnant, Mr Chang (Chang Chen) steps in to hasten negotiations: the courtesan is now the father’s concubine…Mr Chang leaves for Japan, to join a' Chinese revolutionary who fled to escape persecution during the Japanese occupation of Taiwan.

Episode 3 2005, Taipei: A Time For Youth ('Qingchun meng’)
Epileptic and losing sight in her right eye, Jing (Shu Qi) is a singer in present day Taipei and lives with her mother and grandmother and also has a woman lover: Micky. Zhen (Chen Chang) works in a digital photo shop and lives with his girlfriend Blue. When Blue finds out that Zhen has fallen for Jing, she hits the roof... Where can the four of them go from here? None of them will find happiness this side of the grave...

The actors carry each self-contained episode beautifully and give performances that are both tender and deeply moving, whilst the luminous images and use of music (for example The Platters recording of ‘Smoke Gets in Your Eyes’) are astounding.