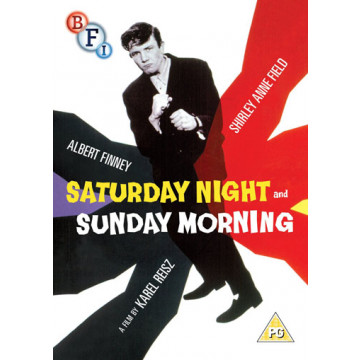 In the industrial streets and factories of Nottingham, Arthur Seaton (Albert Finney) spends his days at the factory bench, his evenings in the local pubs and his nights in the arms of Brenda (Rachel Roberts), the wife of a fellow factory worker. Irresistibly handsome and brimming with animal vitality, Arthur is anti-authority and unashamedly amoral.
Based on Alan Sillitoe's largely autobiographical novel, and with powerful central performances, crackling dialogue and a superb jazz score by Johnny Dankworth, the film stands as a vibrant modern classic. This seminal film of the British New Wave was a great box-office success - audiences were thrilled by its anti-establishment energy, gritty realism, and above all its fresh, outspoken working-class hero.