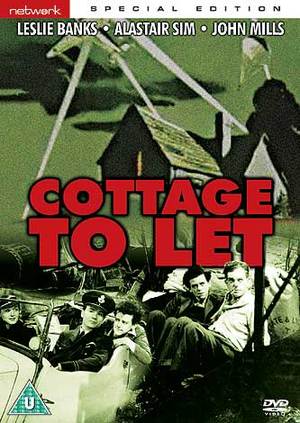 Cottage To Let (1941) (Blu-ray) (UK Import)
Blu-ray Disc
EUR 21,99*
Leslie Banks stars alongside Alastair Sim, John Mills and a very young George Cole in this thrilling wartime espionage drama from award-winning director Anthony Asquith. Adapted from Geoffrey Kerr's smash West End play (which also starred Banks, Sim and Cole), Cottage to Let is presented here as a brand-new transfer from original film elements in its original theatrical aspect ratio.
Working in secret for the Air Ministry at his remote country house laboratory, John Barrington is key to the ongoing war effort against the Nazis. Barrington's household, however, has been infiltrated by enemy agents - who plan to take him back to Berlin as prisoner.

Screen adaptation of the successful wartime play, with an all-star cast.

A Fifth Column organisation plans to kidnap a scientist (Leslie Banks) from his country house laboratory, and while he is unaware of any threat to him he continues working on his revolutionary new bomb-sight. His assistant (Michael Wilding) is suspected of passing secret information to enemy agents, and the arrival of an injured officer (John Mills), a writer (Alastair Sim) and an evacuee from London (a youthful George Cole) only add to the twists and turns of the plot.