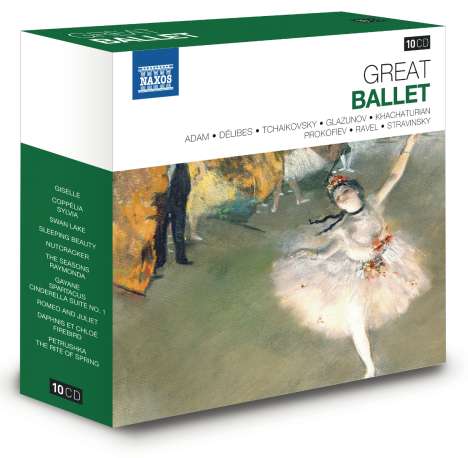 umgehend lieferbar, Bestand beim Lieferanten vorhanden
EUR 32,99*
Versandkosten
Naxos-Jubiläumsbox
Ballet was born from the late Renaissance movement in Europe, combining the classical skills of music, dance and drama. Its origins can be traced back to the dance traditions of the nobility in the French and Italian courts of the fifteenth century. The creation of classical ballet as we know it was developed under the auspices of Louis XIV, and was then further refined in France and Russia in the nineteenth century into the hugely influential and highly skilled concert dance form with which we are familiar today. Fittingly this collection starts in France, with one of the most haunting and memorable examples of the ballet form: Adam’s Giselle. We are then swept along in a whirlwind tour of some of the greatest Russian ballets by such great composers as Prokofiev, Khachaturian and Shostakovich, while no ballet anthology would be complete without Tchaikovsky’s three Romantic masterpieces Swan Lake, Sleeping Beauty and The Nutcracker. From Delibes to Stravinsky, this collection amply demonstrates why ballet remains one of the most loved musical genres.