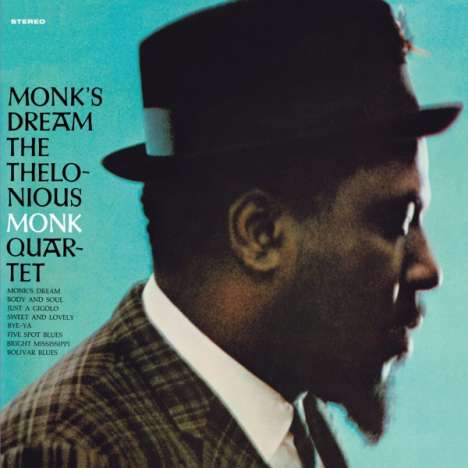 Monk’s Dream was the first album Thelonious Monk released on Columbia Records after his less than amicable departure from Riverside Records. Even though Monk had already recorded all of the tracks on the album, with the exception of »Bright Mississippi«, in a variety of settings, the powerful cohesion of the quartet produced a first-rate work worthy of the praises it received when released, and which it still receives today. It was Monk’s best selling album ever.

»Monk’s Dream«, the title track, had been originally recorded by Monk ten years earlier for Prestige in a trio version on October 15, 1952 (which is included here as a bonus). »Bye-Ya« and »Sweet and Lovely« were also initially recorded by the pianist on that 1952 date. »Body and Soul« was an old Monk favorite, and his first preserved reading of it comes from a privately recorded jam session at Minton’s Playhouse in 1941. He usually played it as a solo piano feature during concerts, and it is included in both of the 1961 concerts issued by Riverside as Monk in France and Monk in Italy (Monk didn’t want to continue recording for the label, so he allowed producer Orrin Keepnews to fill his contractual obligations by issuing these two live tapes).

»Body and Soul« and »Just a Gigolo« are both solo piano performances on Monk’s Dream. »Just a Gigolo« was also a longtime favorite and Monk first recorded the tune, again unaccompanied, for Prestige on September 22, 1954. »Bolivar Blues« was originally titled »Ba-lue Bolivar Ba-lues-are«, and had been included on Monk’s 1957 Riverside album, Brilliant Corners. »Five Spot Blues« was originally called »Blues Five Spot« and had first appeared on the album Misterioso, which was recorded for Riverside live at the Five Spot Café in New York in 1958. »Bright Mississippi« (based on »Sweet Georgia Brown«) is the only track on the album that Monk had not previously recorded in the studio, even though a previous version survives, taped live in Bern, Switzerland, on May 10, 1961.