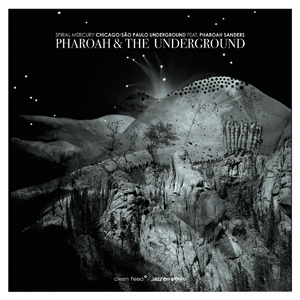 Bewertung:
lieferbar innerhalb einer Woche
(soweit verfügbar beim Lieferanten)
EUR 13,99*
Versandkosten
* Digisleeve
Cornet player, composer and conceptualist Rob Mazurek is a man of many projects. One of them is of simple design but has many wondering implications: it consists in inviting a historical figure of the free jazz field to develop some work with combined approaches, his own and – because it’s a tribute – the guest’s. After doing so with Bill Dixon, short before his death, he came to Lisbon with no less than Pharoah Sanders, John Coltrane’s companion and one of the leading spirits of the pan-African mysticism. For that purpose, Mazurek crossed two of his main bands, Chicago Undeground (including Chad Taylor) and São Paulo Underground (the Brazilian improvisers Mauricio Takara and Guilherme Granado), adding the bassist Matthew Lux to the mix.

The encounter happened as the final act of the 2013 edition of the most important jazz festival in Portugal, Jazz em Agosto, and this is the live recording of that unique event. It’s one more item in the Clean Feed series established in association with the festival organized by the Calouste Gulbenkian Foundation and a special one. The music is an electrifying melting pot between jazz and free improvised music, with a tropical feeling and lots of electronics, something you never heard Pharoah do, but his tenor sax is all around, as it is his way of feeling and thinking. What a treat for our ears!