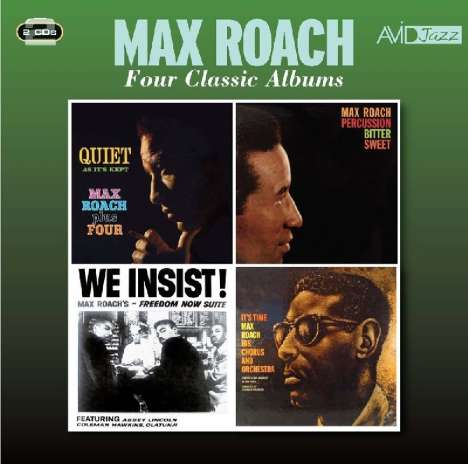 Starting his musical career in 1942 when as an 18 year old he was asked to fill in for Sonny Greer in the Duke Ellington orchestra, Max Roach truly began his professional musical career a year later when he supported Coleman Hawkins in New York. As one of the pre-eminent be-bop drummers of the day, Max Roach has pretty much played with everyone from Miles and Dizzy to Bird and Monk and beyond. During the 1950s Roach hooked up with Clifford Brown and was making fine music with him until the tragic car accident that was to kill Brown and fellow musician Richie Powell (brother of Bud). Following this tragedy Roach formed the +4 unit and made the album which is our first selection, »Quiet As It's Kept« with the Turrentine brothers among the stellar cast. Our further three selections take perhaps a more challenging musical and political direction, but one which will amply reward those prepared to listen with open ears.