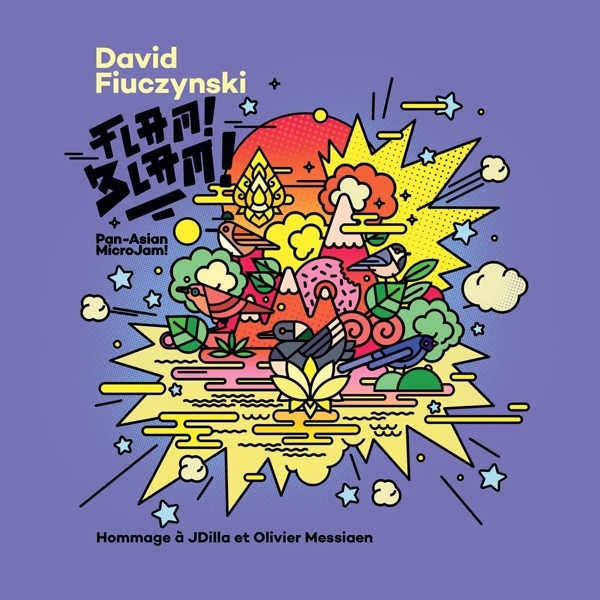 Fiuczynski is joined on both portions of his latest release by former Microjam Institute students Utar Artun on microtonal keyboard, Yazhi Guo on suona (Chinese oboe) and percussion, Helen Sherrah- Davies on violin, Jack Sherman on microtonal keyboard, Justin Schornstein on bass and Alex Bailey on drums. On the opening »Loon-y Tunes«, he employed the calls of the Common Loon and the Carolina Chickadee, then transposed the calls note-for-note onto fretless guitar, violin and microtonal keyboard. Pan-Asian aspects come into play in Fiuczynski's Indianflavored slide guitar solo on this first track. The call of the Northern Nightingale is used on »Flam« while »Q&A Solitaire«, a stunning showcase for violinist Sherrah-Davies, employs the call of the Blackfaced Solitaire. »Oiseaux JDillique« incorporates JDilla's flam beats, Pan-Asian mo-tifs and the call of the Nightingale while »Gagaku Chord Candy«, which contains elements of free jazz, has Fuze emulating an ancient Gagaku orchestra on his fretless guitar while utilizing some of Messiaen's chords.

And the final piece of FLAM!, »Waldstimmen« (»Forest Voices«) reprises all the bird calls together for a fitting conclusion. The three additional tracks feature fire-breathing saxophonist Mahanthappa on »Uira Happy Jam«, which is entirely based on the song of that sonorous Brazilian bird, the spare »Organ Wren«, and the intense closer »Loon-ly Solitaire«, which has Fuze screaming with distortion-laced delight on his fret-less guitar.