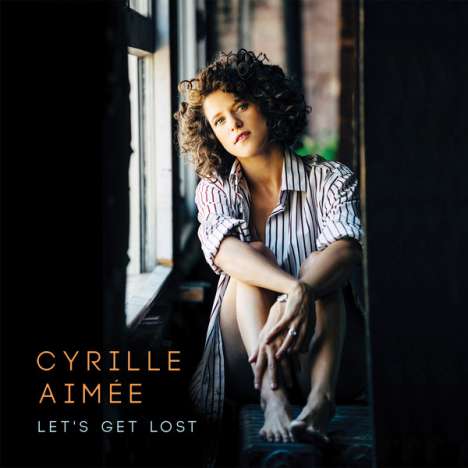 If It’s a Good Day was the sun, Let’s Get Lost is the moon.
A journey through a relationship. Ups and downs.

When we (the band) recorded this we had played hundreds of concerts together and spent a lot of time on the road together. We had all gone through good and hard times together and I think the record reflects this strong relationship we had together.

Live Alone and Like it:
Learned this song while performing in the Steven Sondheim musical »a bed and a chair«. I remembered it from the movie Dick Tracy, and realized that I loved the lyrics! It goes well with what I am going through right now because I just moved to a new place and am living without roommates for the first time ever!…and i like it! :)

There’s a Lull in my Life:
We recorded this song while driving through traffic in a van, and put it up on YouTube. People really liked it so we decided to record it for the album.

Estrellitas y Duendes:
This is one of the songs I grew up on. It’s by Dominican composer Juan Luis Guerra. My mother is from the Dominican Republic and my heart is there as well. The Dominican audience is one of my favorites and I thought it was time to cover a Dominican song to show my love.

Lazy Afternoon:
I learned this song from Kiz Harp’s version. She was an amazing singer but she died really young and never became famous. She only has two recorded albums, and they are pretty rare, but a man gave me a copy one day after a show and I fell in love. This particular song has such an amazing vibe. The melody and the lyrics contribute to this lazy vibe.

Three Little Words:
This is the up beat song of the record. Simple, light, happy and swinging! I really like simple lyrics which are straight to the point. Adrien’s solo is incredible! I remember this one was a first take miracle!

T’es Beau tu Sais:
This is an Edith Piaf song about a blind girl telling her boyfriend how beautiful he is. The lyrics are very poetic. She is telling him »you’re handsome, you know that?« and at the end of the song, you realize that she is actually blind…

Let’s Get Lost:
I love the lyrics of this song. Especially in today’s world where we are always connected, always on our smart phones, and always running around everywhere, sometimes I just want to get lost! Loose my phone and loose myself.. Time seems like it goes by so fast because of these technologies. Sometimes it’s exhausting to always be on top of everything and I just want to be a mess and forget things, and let myself go!

Samois a Moi:
This is a song I wrote about my home town in France. It’s a beautiful village with the river, the forest, and cobble stone streets. I wrote this song on my rooftop in Brooklyn. This is about how much I miss my little village. Sometimes, living is NYC gets so intense. I miss nature, and I miss seeing the stars at night. I really feel myself the most she I am in the forest. I love the sounds of the forest…

Nine More Minutes:
One night Michael and I were hanging out very late in the clubs, and then around 4 in the morning he walked me to my subway platform to wait for my train with me. On the prompter it said it was coming in 9 minutes, and so for nine minutes Michael read me some poems from a book he had in his pocket. Then one day he told me he wrote a song and would like me to put some lyrics to it. He said it was called Nine More Minutes. :)

That Old Feeling:
Who has never felt that old feeling? The one when you think you’re over your ex, until you see him (or her) again… I know I have!

Each Day:
Matt Simons is one of my very best friends. We met in college in NY, and I invited him to my house in France and the Dominican Republic. He was the saxophone player in my very first band »The Surreal Band« and he is now a very famous singer / songwriter in Holland! We have gone through many crazy adventures together, and I think that if you are open to crazy adventures, you never know who you might meet on the way! So, be open!