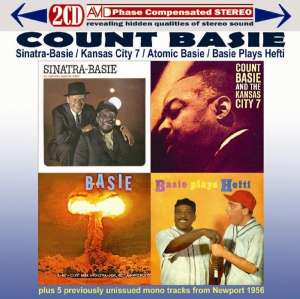 “Sinatra-Basie” continues our new series revealing the hidden qualities of stereo sound and here we again quote from the original liner notes to give you a flavour of what to expect within the grooves. “I’ve waited twenty years for this moment” said Frank Sinatra as the recording session for this historic meeting of two genuine musical giants of the 20th Century began on the 2nd October 1962. A few more quotes….. With arrangements by Neal Hefti ………”it is the balance of power (between Sinatra and Basie) “that is so successful”. “This is not just a band accompanying a singer”….”the band never gets in Sinatra’s way, never distracts from his melody line, treating his vocals as they would treat one of their own soloists”……”this must be the wildest, most unrestrained Sinatra ever recorded”. Phew! You have to listen to this album!

The next album could have been called the return of the Kansas City 7 instead of “Count Basie and the Kansas City 7”. Basie had already put together a smaller quintet in 1936 and three years later it had morphed into a 7 with the likes of Lester Young on board which rolled along until 1944. Fast forward to 1962 and the 7 does indeed ride again albeit a different 7 this time with many familiar Basie faces on board including Frank Wess on flute, Thad Jones on trumpet, Freddie Green on guitar and Sonny Payne on drums.

“The Atomic Mr.Basie” is of course the classic Basie album that we all know and love! Here we present it in our new format, Phase Compensated Stereo to reveal hidden qualities of stereo sound. Or as the original liner notes exclaim “exciting is the word for Basie….electrifying, thrilling, inflaming, arousing”. As the Duke had Strayhorn, Sy Oliver had Lunceford, Fletcher Henderson had Goodman so Count Basie had Neal Hefti! Hence “Basie Plays Hefti”. As the original liner notes attest…”Neal suits the tastes and temperaments of the Basie men in every sort of detail. It provides settings for soloists which bring them out bar by bar, texture by texture, idea by idea as they rarely have been before”.

We hope you will discover for yourselves the hidden qualities of stereo sound.