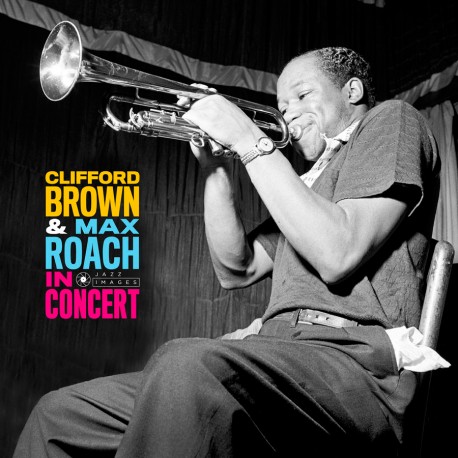 *** Gatefold Cover
The Max Roach-Clifford Brown Quintet started its tragically short run at the beginning of 1954. The first formation included—in addition to Max and Brownie— tenor saxophonist Teddy Edwards, bassist George Bledsoe and pianist Carl Perkins. This group was recorded only once, during a concert at the Pasadena Civic Auditorium on July 13, 1954, which is presented here along with an August 31, 1954 performance on which the first stable formation of the quintet is heard, with the piano and bass chairs filled by pianist Richie Powell (Bud Powell’s younger brother) and bassist George Morrow, and with Harold Land as the tenor player. This fantastic formation was destined to end in tragedy, for in the early morning hours of June 26, 1956, Clifford Brown died in a car accident (at the age of 25) along with pianist Richie Powell and the latter’s wife.