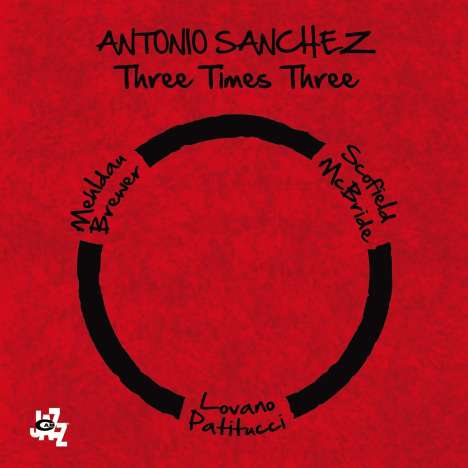 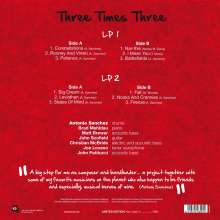 Drummer Antonio Sanchez summoned a group of brilliant musicians for this recording. Three extremely different musical ideas, developed and entrusted to six sensitive, outstanding companions. The pieces featuring Brad Mehldau on piano and Matt Brewer on acoustic bass consists of two original tunes by Sanchez plus a revived standard, that is, Miles Davis' »Nardis«, renamed »Nar-this« here. Mehldau, obviously much in evidence, stands out against Sanchez and Brewer's flowing rhythms while sailing through Miles Davis' tune as well as »Constellations« and »Big Dream«, both by Sanchez. The same pattern applies to the other two groups: the other trio is with Sanchez, John Scofield on guitar and Christian McBride on both acoustic and electric bass – and a new triptych, opening with a gorgeous remake of Wayne Shorter's »Fall«. The ambiance is different, the mood is different: »Three Times Three« shows its second personality, portrayed by Sanchez through two original pieces, »Nooks And Crannies« and »Rooney And Vinsky«. The last of the three trios stars Joe Lovano on ten or sax, John Patitucci on bass and, once again, the band leader on drums. Flowing out to us are »Leviathan« and »Firenze«, two original tunes, whereas the grand finale is entirely given up to the great Thelonious Monk's »I Mean You«. »Three Times Three« excellently unfolds from an amusing, original idea that makes this record uniform and multiform, smooth and amazing to listen to, all at the same time. On this special limited edition Sanchez delivers three brilliant and breathtaking previously unreleased drum solos.