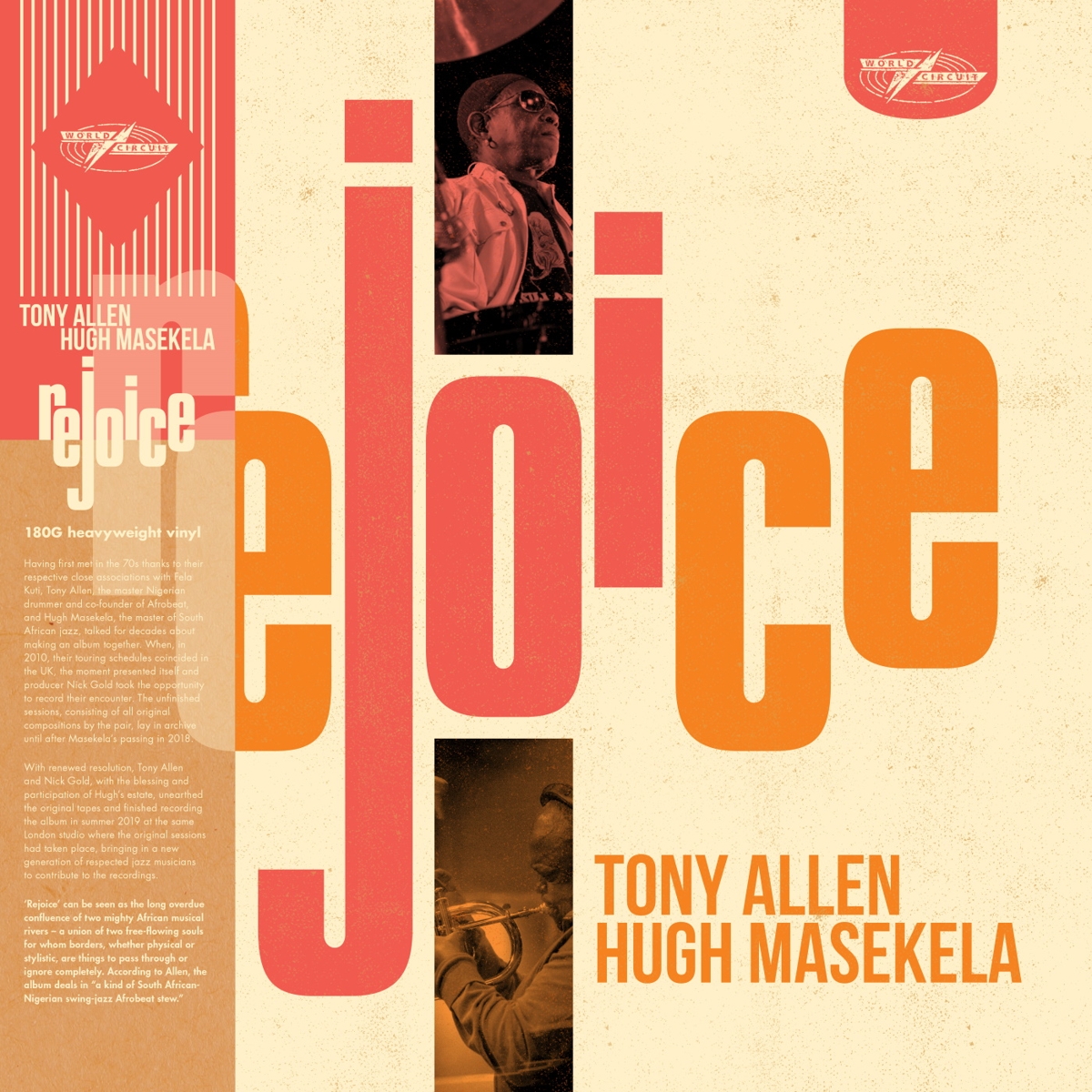 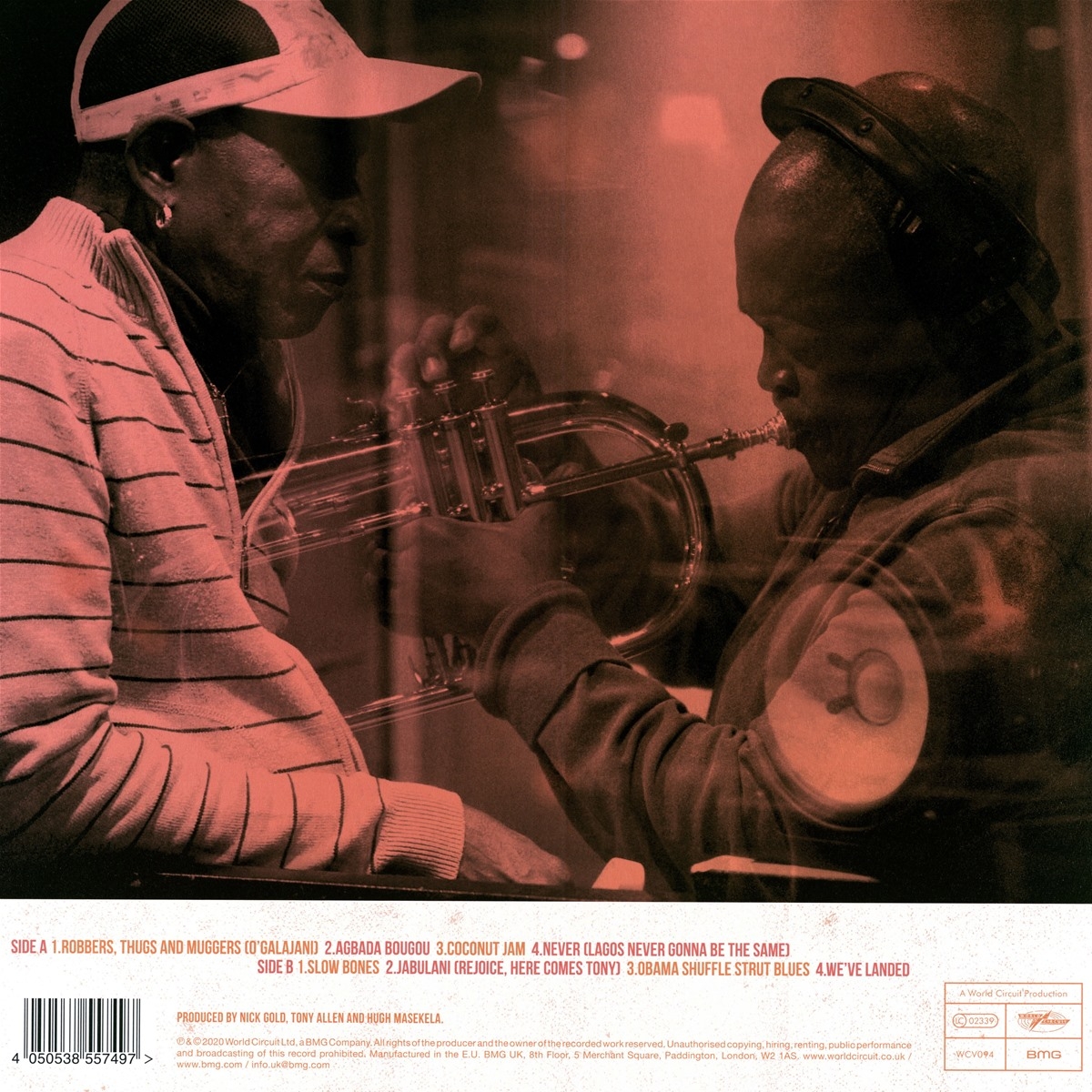 Tony Allen & Hugh Masekela will release their very special collaborative new album »Rejoice« through World Circuit. The record will be the first posthumous release from Masekela, who passed away in 2018.

Having first met in the 70s thanks to their respective close associations with Fela Kuti, Allen, the Nigerian master drummer widely hailed as the co-founder of Afrobeat (and long-time member of alt-rock supergroup The Good The Bad & The Queen), and Masekela, South Africa’s legendary trumpet player, talked for decades about making an album together. When, in 2010, their touring schedules coincided in the UK, the moment presented itself and producer Nick Gold took the opportunity to record their encounter. The unfinished sessions, consisting of all original compositions by the pair, lay in archive until after Masekela passed away in 2018. With renewed resolution, Tony Allen and Nick Gold, with the blessing and participation of Hugh’s estate, unearthed the original tapes and finished recording the album in summer 2019 at the same London studio where the original sessions had taken place. Allen and Masekela are accompanied on the record by a new generation of well-respected jazz musicians including Tom Herbert (Acoustic Ladyland / The Invisible), Joe Armon-Jones (Ezra Collective), Mutale Chashi (Kokoroko) and Steve Williamson.

»Rejoice« can be seen as the long overdue confluence of two mighty African musical rivers – a union of two free-flowing souls for whom borders, whether physical or stylistic, are things to pass through or ignore completely. According to Allen, the album deals in »a kind of South African-Nigerian swing-jazz stew« – a description borne out by even a cursory earful of the parallel harmony horn hook and loping drums of »Agbada Bougou«, the propulsive percussive swing and brass chatter of »Coconut Jam« or the skittering snare drums of »Obama Shuffle Blues«.

As well as blowing exquisite flugelhorn, Masekela was also inspired to overdub some spontaneous vocals on a trio of numbers, either deploying colloquial Zulu, as on the seductively loose-limbed opening track, »Robbers, Thugs and Muggers«, with its earworm chant of »O Galajani« – township slang for any such collective of rogues – or, as on the appropriately jazz-meets-Afrobeat-hued tribute to Fela Kuti »Never (Lagos Never Gonna Be The Same)«, in English.

»The feeling was really good«, Allen recalls of those initial sessions. »All of us were thinking we were going to follow it up with overdubs of percussion, keyboards, voices and so on. It was an exciting idea.« Unfortunately, diarising those studio dates would prove problematic, even though Masekela and Allen would regularly bump into one another on the European festival circuit. »Every time we met he would ask me, ›What’s happening with this project‹? I had to say, ›I don’t know!‹ Eventually I asked Nick if I could hear the tapes, and that started the project back up again. Unfortunately, Hugh passed away soon after.«

Allen pronounces himself very happy with the finished album and remains phlegmatic about its protracted gestation. »Ten years is a long time from beginning to end of [making] an album, but my own philosophy is that everything eventually appears at the right time, for a reason…«

In addition to his unique drumming style, Allen also contributes a hushed but celebratory, semi-spoken commentary to the first single, »We’ve Landed«. »The song is dedicated to today’s youth«, explains Tony, »the lyric addresses people at seventeen, eighteen, nineteen years old, who are slowly becoming more mature, finding out who they are and realising that it’s their generation’s turn to wake up!«