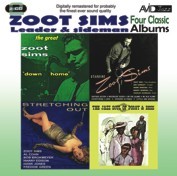 “Stretching Out”; “Starring Zoot Sims”; “Down Home” and “The Jazz Soul Of Porgy and Bess”.

Next up “Starring Zoot Sims” with Henry Renaud and his Orchestra featuring Jon Eardley on trumpet, Renaud on piano, Benoit Quersin on bass and Charles Saudrais on drums. Recorded in Paris in 1958 this great improvised swing session features music of a “uniformly high order”.

The “cool” but increasingly muscular sound of Zoots tenor dominates our third set “Down Home” recorded in New York in 1960. “Down Home” features Zoot in quartet mode alongside Dave McKenna on piano, George Tucker on bass and Dannie Richmond on drums where the quartet has a “down to earth attitude about playing jazz that is complementary to their leader”.

“The Jazz Soul Of Porgy and Bess” is just what it says on the label, to use that awful phrase! The classic opera performed by a bunch of jazz musicians, conducted, orchestrated and arranged by Bill Potts. A & R Director Jack Lewis whose idea it was, knew just what he wanted, “a completely orchestrated version and an overwhelming one at that”. And that is just what he got with the help of amongst others , Zoot Sims, Bob Brookmeyer, Bill Evans, George Duvivier and Charlie Persip.

All four albums have been digitally re-mastered for probably the finest ever sound quality!