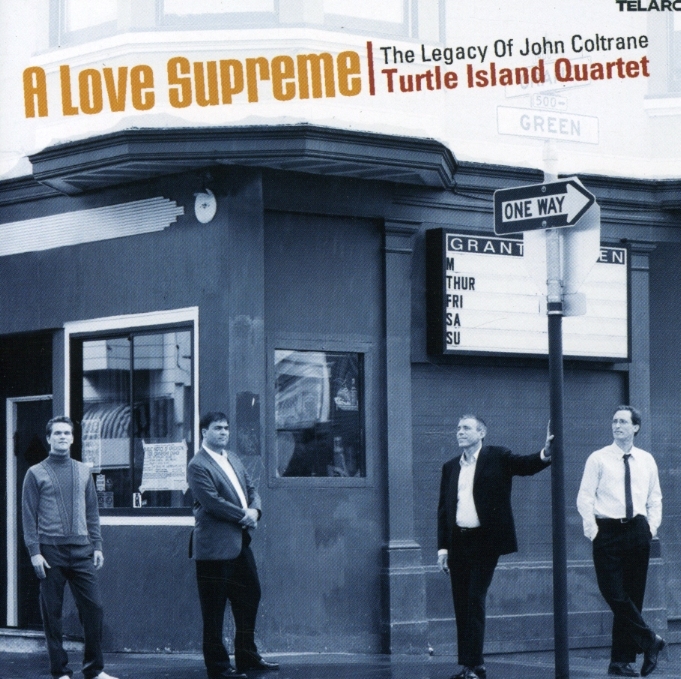 Some music is so finely crafted that the genre in which it is conceived becomes irrelevant to the music itself. Such was the case with much of the work of saxophonist John Coltrane – an artist commonly regarded as a jazz composer, but one whose musical vision transcends the boundaries of what is considered jazz and what is not. Four decades after his death, Coltrane continues to inspire musicians of every perspective – not just jazz players, but any composer or performer who recognizes and respects the inherently exploratory and universal nature of music.

The Turtle Island Quartet – violinist David Balakrishnan, cellist Mark Summer, violinist Evan Price and violist Mads Tolling – are among those artists who see this bigger picture. A Love Supreme: The Legacy of John Coltrane is Turtle Island’s interpretation of music written by – or otherwise reflective of – the 20th century jazz master. The album is set for release on March 27, 2007.

The Turtle Island Quartet has been defying genres and breaking boundaries for more than two decades, “and has shown an ability to function with equal conviction in the classical and jazz realms unmatched by any other contemporary ensemble,” says veteran jazz critic and historian Bob Blumenthal in his liner notes to A Love Supreme. “This is only fitting for players who learned to swing and to improvise as they were learning their instruments.”

And therein lies “the secret of Turtle Island Quartet,” says Balakrishnan. “We’re not classical players interpreting Coltrane’s music. We’re all jazz musicians who have spent years listening to and transcribing his solos. Each one of us has done this. So we’re trying to play this in a way that we’re really breathing his breath, but also incorporating these other influences that we feel.”

Still, Coltrane’s music – created primarily with saxophone, piano, bass and drums – poses particular challenges to a quartet comprised of two violins, a viola and a cello. But “Turtle Island has met these challenges in the past through seamless blends of improvisation, transcription and original orchestration, and with supporting parts that employ pizzicato unisons and walking figures,” says Blumenthal. “All of these techniques are brought into play in the present program, which celebrates several of Coltrane’s most cherished performances as well as two examples of the music he inspired.”

A Love Supreme opens with “Moment’s Notice,” a piece from Coltrane’s classic 1957 recording, Blue Train. In this Mark Summer arrangement, the solos soar deftly through the complex terrain with absolute rhythmic assurance. The followup track, “La Danse du Bonheur,” was penned in the mid-1970s by guitarist John McLaughlin and violinist L. Shakar as a musical reaffirmation of Coltrane’s connection to India. The Turtle Island version of the piece retains the passion of the original 1976 recording at a tempo that allows for added focus on the melody and greater interaction among the strings.

At the centerpiece of the recording is Turtle Island’s interpretation of Coltrane’s four-part masterpiece, “A Love Supreme.” David Balakrishnan’s ingenious, through-composed arrangement weaves portions of Coltrane’s improvisation into the opening “Acknowledgment” section. “Resolution” takes a similar approach in its initial exposition, then clears space for Turtle Island’s impassioned soloists. “Pursuance” begins with a blues theme that is eventually transformed via complex and inspired orchestration. The concluding “Psalm” is an out-of-tempo prayer built on speech-like melodic phrases and intriguing dynamics that enable the quartet to capture the heroic spirit of the original.

While “’Round Midnight” is a Thelonius Monk composition, it was Coltrane’s solo on the piece recorded with the Miles Davis Quintet in 1956 that first drew attention to Trane. Turtle Island’s version begins its second chorus with portions of Coltrane’s famous solo before giving way to the group’s own improvisations.

“Countdown” and “Naima” are taken from Coltrane’s 1959 recording, Giant Steps. Evan Price honors the former with an arrangement built around transcriptions of Coltrane’s “Countdown” solo. Balakrishnan’s arrangement of “Naima” dates back to 1989, when Turtle Island recorded the piece on its Metropolis album. While this version retains characteristics of the earlier Turtle Island effort, it is more unified performance, with ensemble playing that plumbs the spiritual depths “Naima” has come to represent.

The closer, “Song To John” was composed by bassist Stanley Clarke and keyboardist Chick Corea as a tribute to Coltrane for Clarke’s Journey To Love album in 1975. Mads Tolling’s arrangement truncates the original piece’s lengthy opening while retaining the conversational conceit through a mix of solos and ensemble choruses.

“Placing John Coltrane’s legacy in the context of a string quartet will no doubt give some listeners a greater appreciation of the melodic strength that suffuses Coltrane’s music, while others will be pleasantly surprised at how a so-called chamber ensemble can meet his rhythmic and emotional demands without flinching,” says Blumenthal. “Others, more familiar with both Coltrane and the Turtle Island Quartet, will be equally pleased though far less surprised…Whatever the listener’s vantage point, this is a magnificent recording.” (concordmusicgroup. com)