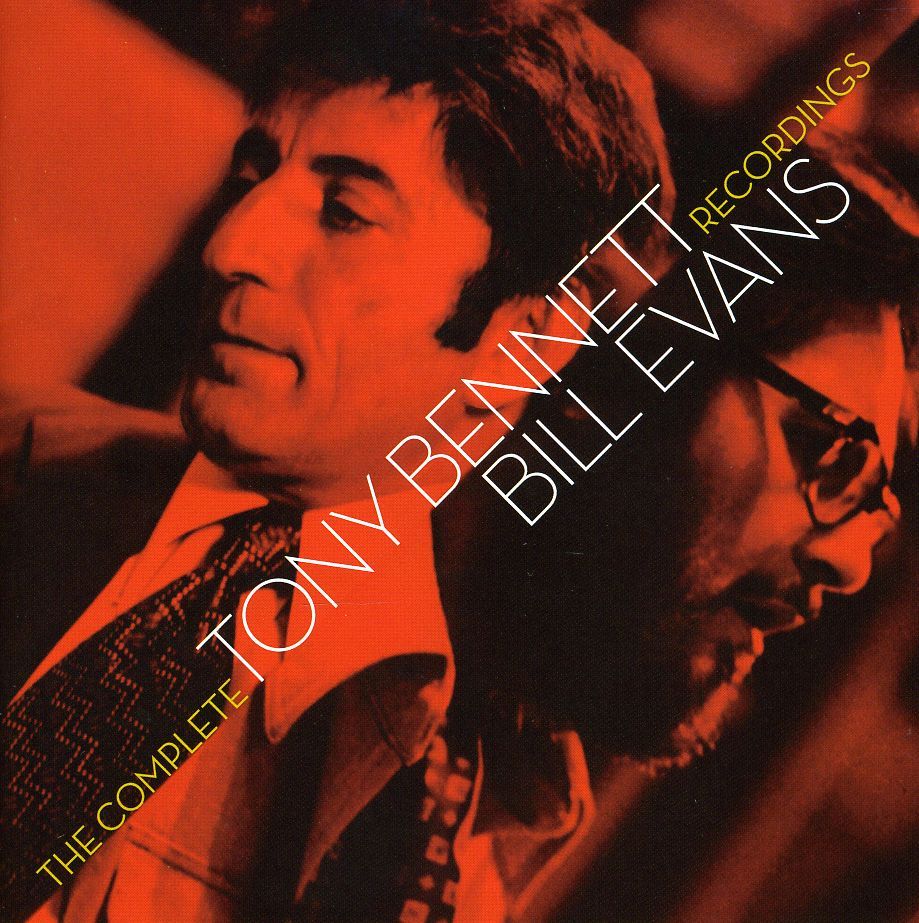 Bewertung:
lieferbar innerhalb 1-2 Wochen
(soweit verfügbar beim Lieferanten)
EUR 18,99*
A sublime 2-CD collection that spotlights the iconic song stylist dueting with the legendary jazz pianist from their two albums recorded in 1975 & 1976.
Disc 1 combines the originally issued recordings, The Tony Bennett / Bill Evans Album and Together Again with two bonus tracks.
Disc 2 features alternate takes from both sessions.
Originally produced by Evans manager Helen Keane, the remastered compilations is produced by Nick Phillips with new liner notes by Will Friedwald.
Inarguably popular music's top song stylist, Tony Bennett joined together with the legendary jazz pianist Bill Evans for two albums of sublime duets recorded in 1975 and 1976. Venerated as gorgeous gems of jazz grace, the two LPs along with numerous alternate takes and bonus tracks are combined on the 2-CD The Complete Tony Bennett / Bill Evans Recordings, released on the Concord Music Group Fantasy Records imprint. Featuring sessions originally produced by Evans' longtime manager Helen Keane, the new compilation is produced by Nick Phillips.
Bennett's collaboration with the exquisite pianist is a jazz treat. While the singer was reluctant to classify himself as an improvisational vocalist, his jazz influences were abundant. He learned breathing and phrasing by listening to pianist Art Tatum and got pointers on having a relaxed delivery by studying Mildred Bailey. His vocal influences included Billie Holiday and Frank Sinatra, who later championed him.
While Bennett found favor in the '50s and '60s on Columbia Records with popular hits, he also had the freedom to stretch in the jazz world, recording albums with the Count Basie Orchestra, Stan Getz and Zoot Sims, among others. However, with the business changing in the early '70s, Bennett left Columbia (in 1972) and began recording on Fantasy Records as well as on his own Improv label.
Originally released in 1975 on Fantasy Records, The Tony Bennett / Bill Evans Album, the first meeting of the vocalist and pianist, featured the pair performing standards, as well as a moving rendition of the pianist's classic tune, "Waltz for Debby" (with lyrics written by Gene Lees). Other standards include "But Beautiful," "The Days of Wine and Roses," "Young and Foolish" and "The Touch of Your Lips."
Bennett recalls that the pair didn't even discuss song choices before the session: "I would name a tune, and Bill would say, 'That's good, let's do that.' We'd find a key and then the two of us would work it out. For about 45 minutes, we'd work out the arrangement, he'd say, 'Do you wanna modulate here? How many choruses do you want?' And then we would play it through and work out all the changes and all that. We spent three days doing that, until we had nine songs in the can."
The first meeting established the Bennett-Evans chemistry, with the two having plenty of room to make their own personal statements. The All Music Guide to Jazz comments, "This is a true duet, with Evans getting considerable solo time." Following the recording, the pair performed live on a number of occasions, including the Newport Jazz Festival (in New York) and on television appearances in The Netherlands and Toronto.
In 1976, Bennett and Evans returned to the studio for Together Again for Improv Records (and later reissued on Concord Records). It's another low-lights, high-improv date of standards that opens with an Evans solo rendition of "The Bad and the Beautiful" and continues with such moving renditions of "Lucky to Be Me," "You're Nearer," "You Don't Know What Love Is," "Lonely Girl," "You Must Believe in Spring" and another Evans' original, "The Two Lonely People" (with lyrics by Carol Hall).
Both sessions--recorded together, not in isolation booths--yielded several fine alternate takes that are included on The Complete Tony Bennett / Bill Evans Recordings, as well as two bonus tracks from the second date, with a superb version of Cole Porter's "Dream Dancing."
Liner note scribe Will Friedwald, who is the co-author of Bennett's autobiography, The Good Life (1998, Pocket Books), writes, "It's not merely that the two projects, The Tony Bennett / Bill Evans Album and Together Again have entered the curriculum for jazz pianists and especially singers--something that Bennett, a tireless supporter of musical education...would keenly appreciate. Rather, to a vast extent, they are the curriculum."
While pointing out that Bennett had previously recorded voice-piano recordings before his collaboration with Evans, Friedwald says that this collaboration was greatly different: "Instead of the singer being accompanied by the pianist, with one in the spotlight and the other comprising a supporting cast of one, both participants are equal partners. Indeed, to stress this, Bennett had the idea of opening Together Again with a piano solo by Evans--so no one would have the false idea that this was simply a vocal record with piano accompaniment. Indeed, the way that voice and keyboard interact here seems to have no antecedent in the whole history of jazz; this is more like an American ideal of lieder."
Reflecting back, Bennett remains especially proud of these sessions with Bill Evans, citing them as the most satisfying projects of his long career.