Roy Haynes: We Three / Just Us / Out Of The Afternoon 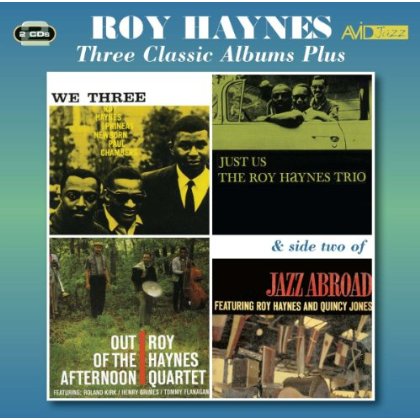 “We Three”, “Just Us” and “Out Of The Afternoon” plus side two of “Jazz Abroad”

“We Three” recorded in 1958 finds Roy accompanied by two old friends from the Five Spot, Phineas Newborn on piano and Paul Chambers on bass. Newborn had loosened up since he had played with Haynes earlier in the year at Birdland where his playing had often been criticised for overplaying. As he is quoted in the original liner notes talking to Cannonball Adderley….”I’m just playing less”. “Just Us” recorded a couple of years later in 1960, Roy Haynes is again in his favourite trio setting here joined by Richard Wyands on piano and Eddie De Haas on bass. “What I need “ he explains in the original liner notes “ is men who can play crisp and fast and also play slow and with a feeling. In a trio every man is exposed and everybody has to be able to make it all the time”.

“Out Of The Afternoon” featuring a quartet this time as we jump forward another two years to 1962. Same location but a very different band! Roy Haynes of course at the drumstool alongside the legendary multi instrumentalist Roland Kirk on tenor sax, manzello, stritch and flutes. Tommy Flanagan on piano and Henry Grimes on bass. The presence of Kirk unsurprisingly stretches the band in lots of different ways and the result is summed up in the words of Stanley Dance as “Snap, crackle”.

“Jazz Abroad”, is quite literally an album of two different sides with side one featuring Quincy Jones and side two featuring Roy Haynes. Unavailable except on vinyl AVID is please to bring these tracks to CD. The Quincy Jones side does not appear on our release and will be featured on a future Quincy Jones project. We have, however left the artwork in its original form.

Side two of “Jazz Abroad” recorded in Sweden in 1954 features Roy Haynes in a more relaxed and informal mood than the Quincy side. Roy is joined by bassist Joe Benjamin plus two members of the Illinois Jacquet band, Sahib Shihab on baritone and alto sax and Adnam Aceo on piano. Completing the line up are two Scandinavians Bjorne Nerem on tenor sax and Ake Persson on trombone.