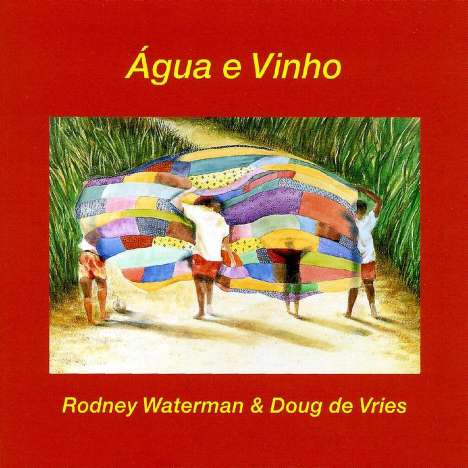 ECM recording artists and Carmo Records founder Egberto Gismonti was astonished, but also very pleased, to receive in 1998 an album by the unorthodox Melbourne-based duo of Rodney Waterman and Doug de Vries: “I’m still surprised by the instrumentation,” Gismonti confessed. “I didn’t expect to hear this much music from recorder and guitar!” To that original recording a further 20 minutes of Egberto Gismonti music, played with verve by the Australians, has been added.

It was Gismonti’s playing and composing which, back in 1995, had provided the impetus for the musicians’ collaborative work: “Doug played me Gismonti’s album ‘Alma’,” Waterman recalls. “I was completely blown away by the music and especially Gismonti’s amazing ability as a performer. Our duo began as a result of this meeting.”

Rodney Waterman graduated from Melbourne University with a degree in musicology and went on to study recorder with Dutch early music specialist and contemporary composer Kees Boeke (who once said, “in early or contemporary music I consider the recorder an avant-garde instrument”) in Italy and Holland. Waterman’s repertoire is eclectic and includes baroque, folk, contemporary and Brazilian music, with a special emphasis on Brazilian music. He also plays lute.

Waterman is particularly interested in exploring, through improvisation, the intrinsic and fundamental beauty of the essentially simple ‘woody’ tonal qualities of the recorder, aiming to discover more of the ‘soul’ and ‘spirit’ of the instrument.

Doug De Vries has won prizes as Australia’s best jazz guitarist, leads his own trio, has a reputation as a writer / orchestrator of music for film and is a regular member of Paul Grabowsky’s Australian Art Orchestra. As a composer, he was commissioned to write a piece, New Metamorphoses, for the Melbourne Symphony Orchestra Metropolis series, which premiered in Melbourne in August 1997. His passion for the music of Brazil took him to that country in May 2000 and, at present, he is studying traditional music forms there.

On ‘Água e Vinho’ the duo’s repertoire incorporates six compositions by Egberto Gismonti, two by Hermeto Pascoal (variously referred to by his countrymen as the Miles or the Gil Evans or the Sun Ra of Brazil), ‘Jorge do Fusa’ by Anibal Augusto Sardinha (1915-55, considered by many to be Brazil’s greatest guitarist-composer), four Catalan folk songs, music of 16th century Spanish composer Diego Ortiz, and original pieces by both recorder specialist Waterman and jazz guitarist de Vries. The music ranges from rollicking afro-samba to pieces inspired by birdsong and Gamelan music.

The album’s liner notes, penned by Waterman and de Vries, include historical / contextual background on the individual pieces.