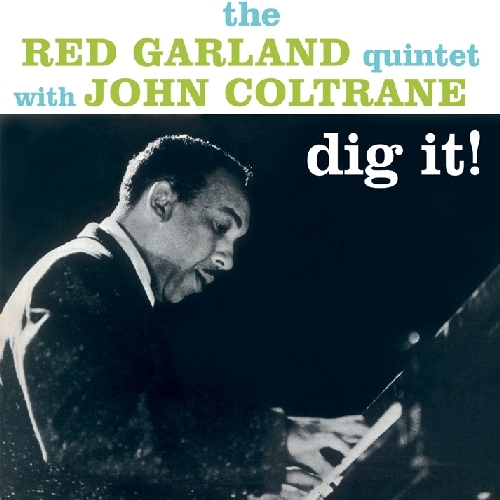 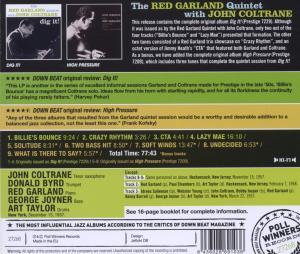 The quintet represented on this album is widely regarded as being one of the most exciting and effective of the Fifties, even though the majority of its work did not come to light until that decade was over. The apparent paradox in that statement is resolved by the fact that this was primarily a recording unit, and although its participants have appeared together publicly in various combinations (most notably Red Garland and John Coltrane), a Red Garland quintet such as is represented here on this record was never a regular working unit.

The three previous collections which feature this unit, All Mornin' Long (Prestige 7130), Soul Junction (Prestige 7181), and High Pressure (Prestige 7209) were very well received, and the nature of the comment about them points to the reasons why this was such a valuable unit. Even given the undeniably unique nature of Coltrane's playing, the quintet represents, in many ways, the essence of New York jazz of the Fifties. The format itself is that established by Charlie Parker and Dizzy Gillespie, and which became the standard basis of the bop and post-bop bands: saxophone, trumpet, and three rhythm. The material was made up of blues, originals, and the best pop and show tunes. Although some lasting jazz pieces came out of this arrangement, the emphasis was almost never on the material itself, but on the treatment of that material. Blowing dates, in other words: vehicles for the display of individual emotion.

Such a loose, free musical arrangement necessitates a high degree of extremely sympathetic rapport between the players involved. With so much emphasis on individual performance, it is easy to see how performances conceived in this manner can degenerate into strings of mutually unrelated solos. It is perhaps an extra challenge to a musician to know that he is treading a very thin tightrope between meaningful jazz and pointless self-indulgence, and that may to some degree account for the small number of classic recordings which have resulted from this format. On the other hand, we are all far more familiar than we would like to be with examples of the latter possibility: sloppily played heads, perfunctory solos, endless running of the same old changes.

It should go without saying that the better and more highly developed the individual talents of the musicians involved, the more likely the chance for success will be. And since the time of these recordings, at least two of the musicians involved have carved ineradicable places for themselves in the story of jazz of the Fifties; the rest have been important contributors.

Red Garland, the leader of these sessions, occupies a unique place in the story of jazz piano. That such immediately accessible music as his should have become controversial is somewhat surprising. But it has, in a possibly significant way. People who write about jazz or discuss it in private have come to employ Garland's work as a standard of comparison. It is quite common to hear a new pianist spoken of as owing a debt to Red Garland; whether or not the assessment is a complimentary one is a matter of the private taste of the person making the comparison, but it is almost always made. First coming to general attention as a member of the Miles Davis Quintet, he has gone on as solo performer and leader of a trio to record a large series of albums, mostly standards, in which he gradually seems to be compiling a definite list of his impressions of the more durable popular songs of our time. In some ways, his career is reminiscent of Erroll Garner's: he is widely acclaimed, contemptuously derided, many people treasure his albums who have little use for any other jazz and through it all, Garland goes right on, doing what he does and leaving the analysis to others.
(concordmusicgroup. com)