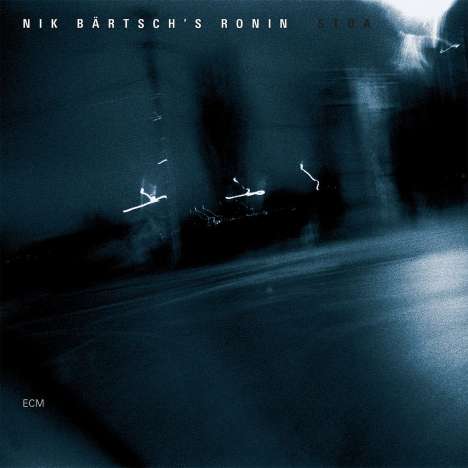 * Nik Bärtsch's Ronin
What is this music that throbs so relentlessly, as it dances in juxtapositions of odd and even meters? For all its dynamic attack, it is clearly not ‘jazz’. Although jazz is part of Swiss pianist and composer Nik Bärtsch’s background, and improvisation has a circumscribed role to play in his pieces, this is not ‘self-expression’ music. Some listeners at Bärtsch’s Zurich club concerts, and a handful of pop critics, have spoken of affinities with “trance” and “ambient” music, but there are no electronic “loops” deployed on “Stoa”. The Ronin band’s complex, iterative grooves are generated in real time (no overdubs) by musicians playing with a tightly-focused discipline, and a very determined, or stoical, grip on the concept of time-playing. More than this, where the drones of “trance” may put you uncritically to sleep, Bärtsch would sooner wake you up. Heightened attention and clarity are the goals.

The music’s interlocking rhythms and modular, repetitive constructions will make more experienced listeners think of the pulsating patterns of ‘classic’ minimalism. Bärtsch is no stranger to the sound-world of Steve Reich, for instance, a composer ECM helped to introduce, and appreciates the way in which ostensibly ‘simple’ material is given time to develop in minimalism, but his own pieces for Ronin deal in rhythms and beats, rather than Reichian ‘pulses’. It is a significant difference. Where minimalism is often concerned with the illustrating and solving of a given musical problem, this is not enough for Nik Bärtsch, who enjoys the “physicality” of the band context, its organic meshing of textures. He says that Ronin plays “Zen-funk”, a label intended to be descriptive, provocative, and, well, Zen-paradoxical. He acknowledges the influence of both Eastern philosophy and James Brown’s earthy ostinatos and differentiated rhythm upon his musical thought.

The compositions on “Stoa” were written during a six month stay in Japan from September 2003 to March 2004, when Bärtsch, with the aid of a City of Zurich ‘Werkjahr’ Award, was finally able to get to the country that had held a powerful appeal for him for twenty years. At 14, Akira Kurosawa’s film “Ran” almost instantly converted him to Eastern aesthetics. Ronin is, accordingly, named for the freelance warriors (see, for instance, Kurosawa’s “Seven Samurai”) who served no master and were unaffiliated to any clan. Japanese ritual music, including the music of the Noh theatre, has influenced Ronin’s work, but at an almost subterranean level. There is no overt importing of elements from other cultures although the music is inspired, philosophically, by many of them...

Prior to Nik Bärtsch’s overdue journey to Japan, he came into the orbit of ECM Records. Early in 2003, producer Manfred Eicher heard Bärtsch playing at the Wasserkirche in Zürich and, through the auspices of a mutual friend, arranged a meeting with the pianist at the Galerie Semina Rerum, where they exchanged ideas. A month later they met again to discuss plans for an album. Subsequently, in far away Kobe, Bärtsch worked on his compositions and reflected on the players best suited to record them.

Nik Bärtsch was born in Zürich in 1971 and by 1980 was already playing with Ronin’s drummer Kaspar Rast, encouraged by an enlightened junior school teacher who started them off on blues, jazz standards and contemporary pieces including Chick Corea tunes. Within two years, they were writing new material for their own precocious jazz band: they have now been playing together for a quarter-century. Bärtsch himself studied both piano and drums and in Ronin he considers the piano also as a percussion instrument (there are many moments when the whole band plays percussively). The extensive shared experience of Bärtsch and Rast informs the group sound: by now they are in sync at an intuitive level in every moment of the music. “It is a really important connection. To have had an extraordinary drummer at my side for so many years has been incredibly helpful.”

Reversing the conventional approach, Bärtsch studied jazz piano for nine years, beginning his classical studies only at 16. After getting his diploma from the Zurich Musikhochschule he went on to study philosophy, linguistics and musicology at the University of Zurich, simultaneously freelancing in diverse bands, “playing everything from fusion to free-funk, and all kinds of extroverted jazz”. At the same time interest in modern composition was growing, especially in John Cage and Morton Feldman. “I became fascinated with the reduction of musical means in Cage, with Feldman's thinking about light and I liked also what Steve Reich said in his writings about the ways in which material creates form. I have given a lot of thought to this.”

As his interest in composition developed, the desire to play live-jazz evaporated: “I just didn’t see the sense of it anymore, for me personally as an instrumentalist”. He played solo concerts and, in 1997, formed the acoustic group Mobile which “develops integral musical concepts within a ritualistic framework.” Their performances have often been marathons, incorporating multimedia elements, or held in unorthodox settings (such as a recent a six-hour concert on the Lake of Zurich).

Feeling the need for a band that could also work in the clubs “and play with more power” Bärtsch launched Ronin in 2001. It was initially a trio, with Kaspar Rast and the versatile Swedish bassist Björn Meyer, whom Bärtsch had met in the late 1990s on tour with guitarist Harald Haerter. Andi Pupato was added on shakers and other percussion in 2002. “It often happens that the rattles and shakers can lift up the whole band. Near the end of ‘Modul 35’ on the new album, Manfred stressed the shakers in the stereo mix and the whole performance seems to shift to a higher groove level. And yet the change is almost imperceptible. You feel it more than you hear it. It’s a kind of homeopathic approach to percussion playing! We think a lot about precision in this band. We don’t see the percussionist as an eccentric figure, as in the fusion or salsa bands. Rather than being very free or very busy, he’s paying attention to the rhythmic components in the micro-phrasing, with his woodblocks and gongs and rattles and bells.”

Andi Pupato has played Afro-Cuban and African music as well as flamenco. Björn Meyer has a strong connection to Swedish folk music, and plays in the experimental “tripfolk” group Bazar Blå. Kaspar Rast, the son of a violin maker, comes from a musical family with a connection to the Swiss folk tradition. “Of all the band, I’m the one who is the furthest away from folk or world music traditions in terms of playing experience in my childhood. But I love for instance Bartók and his treatment of folk music and Stravinsky’s reinvention of folk music: my affinity for this is as strong as my feeling for Japanese ritual music. And I believe the folk experiences of the other band members help them to interpret my compositions very naturally.”

Newest member of the band is 22 year old clarinettist Sha, whose vaguely mystical artist’s name is simply a contraction of the more regional-sounding Stefan Haslebacher. He replaced the former reeds player in Mobile and came to be part of Ronin by virtue of his unshakable enthusiasm. Now he is making waves in the Swiss ‘new minimal’ scene himself. “Already at 19 he had a good feeling for phrasing and our kind of pattern-music and he’s grown amazingly as a player.” In November 2004, Bärtsch and Rast initiated Monday workshop sessions, with changing personnel, in Zurich. “When I was trying to decide which players should appear on the ECM album it seemed obvious to go with those that had been the most committed to the Monday concerts. That turned out to be Ronin, as a band, plus Sha, who was there every single week. So it seemed a good idea to make him a full member of the band, and to feature the dark sounds of his bass and contrabass clarinets. I like very much the sense of breath in his phrasing, as well as the very rhythmic treatments he introduces.”

Most of the pieces on “Stoa” are through-composed, but there is also some improvisational freedom and interpretive leeway. The introduction to “Modul 36” with Björn Meyer’s bass and Bärtsch’s “overtone chords” was freely improvised, for instance. The pieces acquire new details in performance too: several sections of “36”, including the fast piano / bass clarinet unison lines, arrived as afterthoughts in this way and were arranged by Bärtsch and added to the piece. “Modul 35” is rigorously written, “like a classical piece that could realistically be given to another ensemble to play”, until the last “dark section” with the piano solo. “Manfred suggested leaving the high bell out of the final part which was a smart idea. It opened up some space, made the sound more magic and agile and less obviously structured. A little thing like this can change the whole energy.” Sha treats the melody quite freely in the “flowing section” of “Modul 32”, and the very percussive bass clarinet in “33” is also Sha’s innovative interpretation of the composed bass line. Quite frequently in concert, Ronin combines its ‘modules’, and this is what is happening in “Modul 38_17”, where an older construction is stacked on top of a new one.

“Most things on the record are written in all their details, and we had worked hard on the material on the road, developing it and streamlining it. But how the pieces sound also has a great deal to do also with the producer’s ear for placement and emphasis. We all feel very good about the results. Our previous experience of recording had always been a bit guerrilla-like. The circumstances of the new recording allowed us to fully concentrate on the music for the first time. That is a big step forward.”

“Stoa” was recorded in Studios La Buissonne in Pernes-les-Fontaines, France, by Manfred Eicher with engineer Gérard De Haro, in May 2005, and will be baptised with a special release concert by Nik Bärtsch’s Ronin in Zurich’s Kaufleutensaal on March 10th 2006. The launch concert is followed by dates in March in Bern, Basel, Berlin, Memmingen, Munich, Lugano and Novara (May). For more details, consult the tour page.

"The vivid music of Bärtsch, a Swiss composer and pianist offers a new sound vista. At first, his small, mainly acoustic ensemble appears to be playing Steve Reich-style minimalism but, seven minutes in, the electric bass cranks up and suddenly the music is surfing over James Brown funk. … Bärtsch chooses to call his musical journeys “Zen-funk” and by the fifth piece … the relentless momentum, as odd and even-metered rhythms merge and mingle, proves to be thoroughly hypnotic." (John Bungey, The Times)