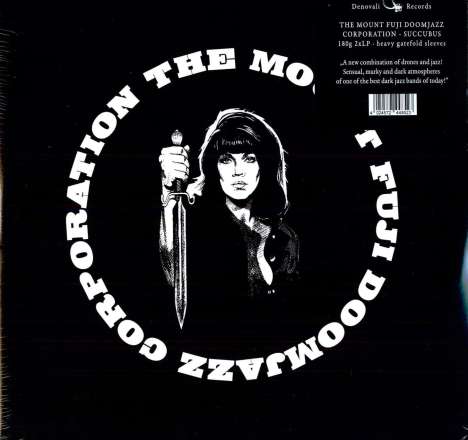 The Mount Fuji Doomjazz Corporation
Egor (180g) (Limited Edition) (Turquoise Vinyl)
2 LPs
EUR 39,99*
*** Gatefold Cover
Seductive but perilous, he Kilimanjaro Darkjazz Ensemble's new session under the Mount Fuji Doomjazz Corporation name is a new combination of drones and jazz. Creating sensual, murky and dark atmospheres, "Succubus" the evolution of this band, with stronger horns and a focus on hypnotic, soundtrack-like material. A deep, dark and yet seductive trip again for the corporation. After the corpses, the succubus. While rehearsing for their post "Mutations EP" shows, The Kilimanjaro Darkjazz Ensemble recorded a new improv session under their Mount Fuji Doomjazz Corporation moniker on the 15th of January 2009. Faithful to the original TKDE concept of drawing inspiration from movies, they recording what later became "Succubus" while watching Jess Franco's film of the same name. This iconic 1969 movie, with its strong erotic mood, fragmented story line and oneiric photography encompasses perfectly the goal and means of TKDE / TMFJDC, in the way the band builds mesmerizing, deep and otherworldly atmospheres. More jazz-oriented than their heavier previous CD, "Succubus" leaves more room to Charlotte Cegarra's vocals and Hilary Jeffery's trombone, while the narrative is still led by Gideon Kiers (of Telco Systems)'s drums and Jason Kohnen (Bong-Ra)'s bass. Sensual, mysterious, pulsating and hazy, while "Succubus" is certainly not a new soundtrack to Jess Franco's film, it is definitely something to be listened to in one take, and conveys the same feeling of displacement and lust. A new stone in the discography of the two headed entity that is TKDE / TMFDJC, "Succubus" displays the "corporation" in its most macabre yet entrancing side. Audio cinema has seldom sounded so lustful. 300 COPIES AND COMES WITH THICK GLOSSY HEAVY GATEFOLD SLEEVES