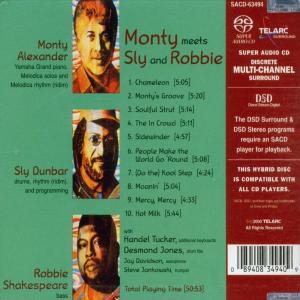 Sophisticated and down-to-earth, Monty Meets Sly and Robbie crafts its own blend of jazzy soul infused with fresh beats and a stripped-to-the-bone sound. Rousing takes on Joe Zawinul’s "Mercy, Mercy, Mercy," The Stylistics "People Make The World Go Round," Ramsey Lewis’ "The In Crowd," Herbie Hancock’s "Chameleon," and other numbers from the late ‘50s and ‘60s, connect Alexander not only to jazz, but to an equally worthy legacy of soul.

Monty Alexander grew up in Kingston, Jamaica where he began piano lessons at the age of six. While still a youngster, he enjoyed the performances of Louis Armstrong and Nat "King" Cole, and his style of playing was deeply affected by their joyful gospel of jazz. In 1963, Alexander was performing in Las Vegas, Nevada with Art Mooney’s Orchestra and was observed by Jilly Rizzo and "the chairman of the board" Frank Sinatra. Jilly hired him to work at his club in New York City, and it was there that he met and was hired by Milt Jackson. Soon after, he began an association with bassist Ray Brown that lasted for years. He also went on to perform with such jazz legends as Dizzy Gillespie, Clark Terry and Sonny Rollins. Over the years, he’s also collaborated with Jamaican guitarist Ernest Ranglin. Alexander continues to tour extensively.

On his 1999 Telarc debut, Stir It Up: The Music of Bob Marley (CD-83469), Alexander gave the jazz treatment to such well-known Marley compositions as "I Shot The Sheriff," "No Woman No Cry," "Is This Love?" and "Jammin’." This groundbreaking project also featured special guest Steve Turre on trombone and conch shell, and Sly Dunbar’s remixed version of "Could You Be Loved." (concordmusicgroup. com)