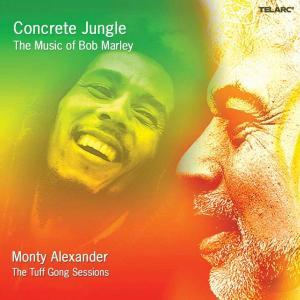 In 1999, Jamaican born jazz pianist Monty Alexander made his Telarc debut with the release of Stir It Up, a tribute to the music of reggae icon Bob Marley. Since then, Alexander has assembled a diverse body of work on Telarc, with recordings ranging from straightahead jazz to the American songbook to world music. Seven years after Stir It Up, Alexander digs deeper into the music and mythos of Bob Marley with Concrete Jungle, a further exploration of Marley’s legacy.

Recorded in the late summer of 2005 at Marley’s own Tuff Gong Studios in Kingston, Jamaica, and embellished by a crew of highly talented session players from the U. S. and Jamaica, Concrete Jungle is a set of twelve compositions penned by Marley and reinterpreted via Alexander’s jazz piano-oriented arrangements. The resulting union of musical sensibilities captures the passion and freewheeling creative spirit that have made Marley a universally recognized icon a quarter century after his death—not just within the reggae nation but throughout the world.

“From the time we started the sessions on the evening of September 19 to our departure from Tuff Gong Studios five days later, it was as if the Spirit that dwells in the music of Bob Marley had smiled on us,” says Alexander. “All through the sessions there were feelings and thoughts of loving oneness with every person in the studio who shared in this experience, with all the players and the good people who would come into the room.”

What came out of the room is a compelling and transcendent recording, beginning with the highly rhythmic “Africa Unite,” which juxtaposes Alexander’s melodic jazz lines against a percussive reggae backbeat. “War” is one of the most stirring tracks on the album, beginning with nothing more than Luciano’s plaintive vocals alongside Alexander’s solo piano. But once the rhythm section kicks in, everyone takes a turn at the microphone, resulting in a richly layered musical plea for world peace.

“Babylon System” begins as a gentle acoustic ballad, but the laid back tempo is deceiving. There’s a measure of rhythmic and emotional intensity here that is undeniable at any speed.

Further into the set, a carefully arranged horn section (saxophonist Dean Fraser, trumpeter Dwight Richards and trombonist Delfeayo Marsalis) lends an element of swing to the otherwise reggae-flavored “Trench Town.” The following track, “Three Little Birds,” is an earthy, impromptu free-for-all, courtesy of the Mento Men. The trio builds a compelling sound with nothing more than a simple chord progression and vocal line augmented by Alexander on melodica, an honest and direct expression of the reggae experience.

Concrete Jungle is almost as much about location as it is about the music itself. “We wanted to take this recording another level up from Stir it Up in terms of depth and authenticity,” says producer Elaine Martone. “Kingston is a challenging city. I had serious misgivings about doing the sessions there. But Monty pushed for the idea, and he was right. There’s an energy within the walls of Tuff Gong that’s almost mystical. And when we factored in the rich, multicultural dimension of the players whom we brought into the sessions, the resulting experience—and the resulting recording—was transformative. We could not have made a recording like this anywhere else. One love.” (concordmusicgroup. com)