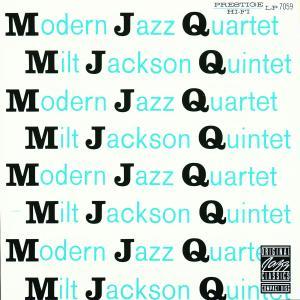 The Modern Jazz Quartet
The Music Of The MJQ
CD
EUR 7,99*

MJQ here stands for two different but connected groups — the Modern Jazz Quartet and the Milt Jackson Quintet. The first four selections are from the Quartet's classic December 1952 session, its first for Prestige and first under the name Modern Jazz Quartet. The rest of the material comes from a 1954 date with Horace Silver in place of John Lewis, and Henry Boozier, a little-known but bluesily effective, personal trumpeter, added to the front line.

The main man in the spotlight is Jackson, who displays his natural blues feeling and shimmering lyricism in two different settings and a variety of moods from Lewis's stately Vendome to Silver's earthy Opus de Funk.