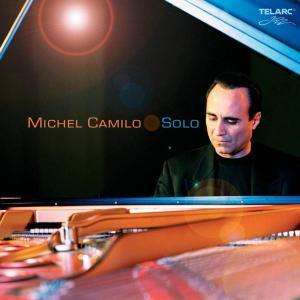 “The concept upon which the collection is built—the map, as Camilo puts it—is to balance three different universes. By giving equal representation to music from Brazil, jazz-related standards, and his own original compositions, Camilo has created an interwoven trilogy that yields his own distinct profile.” —Bob Blumenthal, from the liner notes.

Well-known for his fiery style and intimate familiarity with a vast range of jazz and Latin idioms, Grammy winner Michel Camilo has always had a sense of musical adventure, and his third Telarc release is no exception. Critics everywhere have praised the Dominican jazz pianist’s talents as a composer and arranger, but Solo showcases him as a performer. Although Camilo has been honing the concept for seven years, this is his first solo album and marks a major milestone in his career.

“It certainly took me a long time to go into the studio and record this album,” says Camilo. “I wanted it to be a deep personal statement that would reflect some of my musical influences, as well as the exotic colors, textures and nuances which I have been developing into my piano playing for the last several years.”

Produced by Camilo and recorded at Avatar Studios in New York in May 2004 without any overdubs, the 12 tracks on Solo are organized into chapters spotlighting four Brazilian gems (Francis Hime’s “Minha” and “Atrás Da Porta,” along with Antonio Carlos Jobim’s “Luiza” and “Corcovado”), four jazz standards (Ricardel / Evans’ “The Frim Fram Sauce,” Monk’s “‘Round Midnight,” and Gershwin’s “Our Love Is Here To Stay” and “Someone To Watch Over Me”), and three new Camilo originals. The album closes with a reworking of the pianist / composer’s popular “Suntan.”

“I think of this album as a trilogy,” adds Camilo. “The three musical worlds closest to my heart are equally represented, and at the same time each song tells a story that I hope will touch the listener in a special way.”

Born in Santo Domingo, Dominican Republic, in 1954, Michel Camilo is one of the most riveting performers in jazz today—as immortalized by his blazing performance in the film Calle 54. Although a jazz player first and foremost, he’s clearly not afraid of developing a reputation as one who breaks the rules.

Camilo is equally renowned as a composer, and artists ranging from Dizzy Gillespie to The Manhattan Transfer have performed his works. His diverse resume includes performances with symphony orchestras, compositions for film, and collaborative projects with musicians like Paquito D’Rivera and pianists Katia and Marielle Labeque. Spain, Camilo’s 2000 Verve release with flamenco guitarist Tomatito, won Best Latin Jazz Album in the first Latin Grammy Awards.

Released in 2003, Live at the Blue Note was Camilo’s first live album and his first recording with a Cuban rhythm section. This two-CD set, which scored a Grammy for Best Latin Jazz Album, offered a mix of mostly originals, played with gusto by bassist Charles Flores and drummer Hernandez. In 2004, Camilo won JazzWeek’s Award for Artist of the Year. Solo, Camilo’s 16th album overall, provides a stunning demonstration of his creativity, transcending technical virtuosity and improvisational vocabulary to convey real emotion.