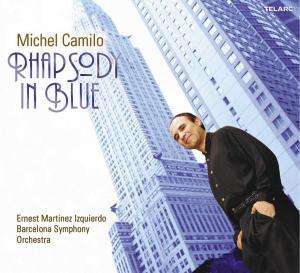 Michel Camilo (geb. 1954)
Triangulo (UltraHD-CD)
CD
EUR 44,99*
+ Ernest Martinez Izquierdo, Barcelona Symphony Orchestra
Telarc International Corporation is proud to announce that Michel Camilo has been awarded a Latin GRAMMY® in the category of Best Classical Album by the Latin Recording Academy for Rhapsody in Blue, released on February 28, 2006. Winners were announced at the 7th Annual Latin GRAMMY® Awards Ceremony on Thursday, November 2 at Madison Square Garden in New York. The ceremony was broadcast live on the Univision Network.

On Rhapsody in Blue, the Dominican-born pianist pays homage to George Gershwin with the help of the 95-piece Barcelona Symphony Orchestra (Orquestra Simfònica de Barcelona i Nacional de Catalunya), conducted by Ernesto Martinez Izquierdo. On the heels of two of his finest recordings to date - the Grammy winning Live at the Blue Note (2003) and the intimate Solo (2004) - Rhapsody in Blue seamlessly merges jazz and symphonic sensibilities with a unique rendition of Gershwin's immortal "Rhapsody in Blue," followed by some of the great American composer's lesser known works - his Concerto in F, followed by his Prelude No. 2 for solo piano, with a touch of improvised blues.

"This is so great," says Camilo, "I am honored to win my first Latin GRAMMY® for Best Classical Album. It feels like a dream come true since it took me several years of preparation to make this album a reality and pay tribute to one of my favorite composers, George Gershwin, and his music. I am grateful to my producer Elaine Martone and my conductor Ernest Martinez Izquierdo for understanding and supporting my personal vision of these works from the very beginning and for taking care of capturing and bringing out the beautiful playing from all the wonderful musicians in the Barcelona Symphony Orchestra. It was amazing how easily we all connected and were able to make music together. Thanks also to Bob Woods and everyone at Telarc for believing in me, and most importantly to my wife, Sandra, for her constant love and for always keeping me inspired and creative."

"I am thrilled to win my first Latin GRAMMY® Award," says producer Elaine Martone, Executive Vice President of Production at Telarc. "This recording is a great example of how music crosses boundaries of many kinds. The idea of a Spanish orchestra playing traditionally American repertoire with a jazz pianist could make some skeptical. I would tell those people to listen to this recording. Gershwin would have most definitely approved of the swinging and energetic playing of the wonderful Michel Camilo and the stylistic accompaniment of the Barcelona Symphony and their conductor. When we were recording the piece, I felt the power and magic of the music."

On April 24, 2007, Camilo returns to the straight-ahead trio format with the release of Spirit of the Moment, which features bassist Charles Flores and drummer Dafnis Prieto.

Since 1980, Telarc has been honored with 49 GRAMMY® Awards for performance, production, and engineering. Other important awards have included the French Grand Prix du Disque and Diapason d'Or; Japan's Record of the Year; Germany's Audiophile CD of the Year; Gramophone Magazine's 2004 Label of the Year. Although it began as a classical-only recording company, Telarc now boasts a catalog of more than 1000 recordings, ranging from classical and classical-crossover to jazz, contemporary jazz, Americana, pop and blues. Telarc releases approximately fifty-five recordings each year, working with a notable roster of artists.

The Latin Recording Academy is a membership-based organization comprised of recording artists, musicians, producers and other creative and technical recording professionals who are dedicated to improving the quality of life and cultural conditions for Latin music and its makers. In addition to producing the Latin GRAMMY® Awards to honor excellence in the recording arts and sciences, the Latin Recording Academy provides educational and human services programs to the Latin music community.

While the earliest roots of jazz run deep in the African American blues experience, the music would not be what it is today if not for the vast wave of immigrants who grafted their musical and cultural sensibilities to the burgeoning art form during the early decades of the 20th century.

One of the most important names in this early chapter of the jazz story is George Gershwin. Born to immigrant parents in Brooklyn, NY, in 1898, Gershwin’s deep European roots enabled him to marry the Old World with the New and redefine American jazz in a way that no musician had ever done before.

Fast forward several decades to the late 1970s, when Michel Camilo, a young pianist from the Dominican Republic, arrived in that same culturally vibrant New York that welcomed Gershwin’s parents in the late 1800s. Camilo’s career-long love affair with American jazz in general and Gershwin in particular is at the heart of Rhapsody in Blue, a new Telarc recording set for release on February 28, 2006. The album pays homage to Gershwin with the help of the 95-piece Barcelona Symphony Orchestra (Orquestra Simfònica de Barcelona i Nacional de Catalunya), conducted by Ernest Martinez Izquierdo.

On the heels of two of his finest recordings to date—the Grammy winning Live at the Blue Note (2003) and the intimate Solo (2004)˜Camilo’s newest effort on Telarc seamlessly merges jazz and symphonic sensibilities with a unique rendition of Gershwin’s immortal “Rhapsody in Blue,” followed by some of the great American composer’s lesser known work—his Concerto in F, followed by his Prelude No. 2 for solo piano, with a touch of improvised blues.

“I’m a big admirer of Gershwin. I always have been,” says Camilo, who has included Gershwin music in his stage and studio repertoire since the earliest days of his career. “The reason is because he pushed all the boundaries from one musical world to another, and he did it with no fear. I have been trying to do the same with my career, going from jazz to film scores to world beat experiments to guest solo performances with symphony orchestras.”

Fernando Gonzalez, managing editor of Jazziz magazine and author of the Rhapsody in Blue liner notes, takes the comparison a step further. “Like George Gershwin before him, Camilo is an irrepressible New World romantic,” says Gonzalez. “Both his music and his playing are open faced, generous, and ambitious, full of energy and brash optimism.”

For Camilo, the project was all about preserving the freshness and immediacy of Gershwin’s music—no small feat with 95 other musicians playing along. “There’s a certain spontaneity that I wanted to capture in this music. I discussed this with Ernest and the orchestra, and we all went after that magic,” says Camilo. “I didn’t want it to sound too formal, but instead a little bit wild…With music like this, a performer will often ‘play the ink,’ which means playing the notes that Gershwin wrote for the piano part. But I tried to make it sound like I was improvising by taking some liberties, although I was playing the ink. That was the spirit I was trying to capture.”

Would Gershwin approve of a 21st century jazz interpretation of his work? Gonzalez has little doubt. Michel Camilo’s Rhapsody in Blue “is a streetwise approach to Gershwin’s work,” he says. “Respectful but not reverential, exact but also swinging, classical in form but jazz in spirit—that would have done Gershwin proud.”