Michael Feinstein: Change Of Heart: The Songs Of André Previn 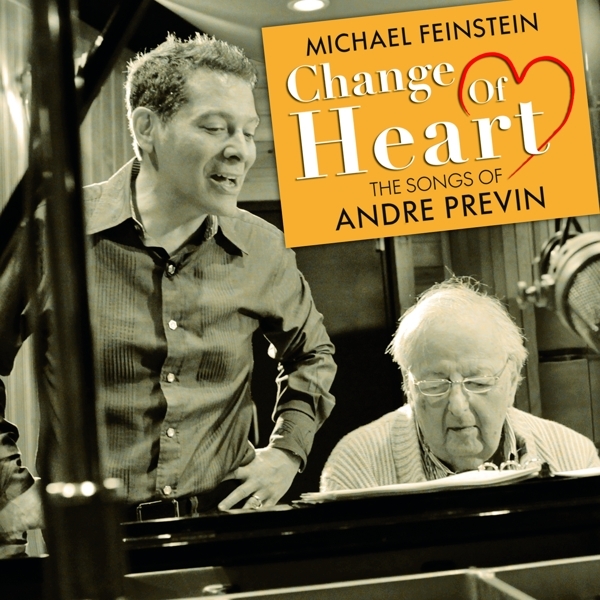 The supremely talented singer and pianist Michael Feinstein collaborates with legendary composer-conductor-pianist André Previn for an album celebrating Previn’s repertoire from his lesser-known catalog of pop songs, including many that were written for film.

André Previn, whose career spans seven decades, is a music icon, establishing a stellar presence in classical, jazz, opera, film scoring and musical theater. His life’s work is brimming with achievement highlighted by four Oscars and 11 GRAMMY® Awards (including a Lifetime Achievement citation in 2010). With such a diverse imprint on the world of music, it is no wonder his list of collaborations are comprised of artists like Shelly Manne, Red Mitchell, J. J. Johnson, Joe Pass, Ray Brown, Ella Fitzgerald, Doris Day, Sylvia McNair, Niels-Henning Ørsted Pederson, Mundell Lowe and, most frequently in recent years, bassist David Finck. Michael Feinstein is now part of this incomparable list.

Feinstein’s own vast catalog of recordings features several albums on which he is accompanied by legendary songwriters, performing their own tunes, including Jule Styne, Burton Lane, Hugh Martin and Jay Livingston. However, this recording has its own unique flair with Feintstein’s vocals, Previn on piano, and Finck on bass. This is, to the best of Previn and Feinstein’s knowledge, the first time Previn has partnered with a male vocalist.

The project began last April when Feinstein telephoned Previn to wish him a happy birthday. “When I called,” says Feinstein, “I said I would like to do an album of his songs. There was silence. Finally he said, ‘Is there enough?’ He was quite serious, because he didn’t take into account the voluminous amount of work he had done through the years. I think he came to dismiss his own songs, presuming that because they weren’t necessarily hits, they weren’t worthwhile or worth revisiting.” Says Previn of that initial conversation, “I proposed to Michael that there wouldn’t be more than a dozen people who would be interested, but he argued with me, and he is very persuasive, so I said okay.”

The album opens with “(You’ve Had) A Change of Heart,” with lyrics by Previn’s most frequent collaborator, his second wife Dory Langdon. The second track, “The Easy Way,” was written for the 1968 screen adaptation of Jacqueline Susann’s Valley of the Dolls, but not included in the film. Also from Valley of the Dolls, performed in the film by Patty Duke’s character, is “Give a Little More.” “Empty Is My Room” and “Goodbye” are from an unproduced score for a musical film adaptation of Goodbye, Mr. Chips. Feinstein says, “André has a tremendous gift for melody and is able to write songs that have complexity but are very accessible.”

The album also includes “Yes” best known from the version recorded by Doris Day, with Previn, in 1962 for the album Duet, “It’s Good to Have You Near Again,” and “Just for Now,” and “Little Lost Dream,” from Johnny Mercer’s final stage show, a musical adaptation of novelist J. B. Priestley’s The Good Companions. Two of Previn’s film themes are “Two for the Seesaw (A Second Chance)” and “Why Are We Afraid?.” The final works on the album are “Quiet Music” from Previn’s 2001 album Live at Jazz Standard, with Finck and “You’re Gonna Hear from Me,” featured in the 1965 film Inside Daisy Clover, costarring Natalie Wood and Robert Redford, which remains one of Previn’s best-known songs.

In assessing Change of Heart, Previn says, “We had a good time making the album.” From Feinstein’s perspective, “It was thrilling working with André. He’s got the greatest sense of humor, is a great storyteller and he’s a link to a history that is very important to me; yet he’s still here, still contemporary and still making great music. He’s one of the most versatile musicians I have ever known because he is completely unfettered by genres. He loves all kinds of music and is conversant in a way that is staggering, yet he is very humble and self-effacing, especially when it comes to his own work. I suspect it was fun for him to look at these songs and find out that what he wrote was a hell of a lot better than he remembers it.”