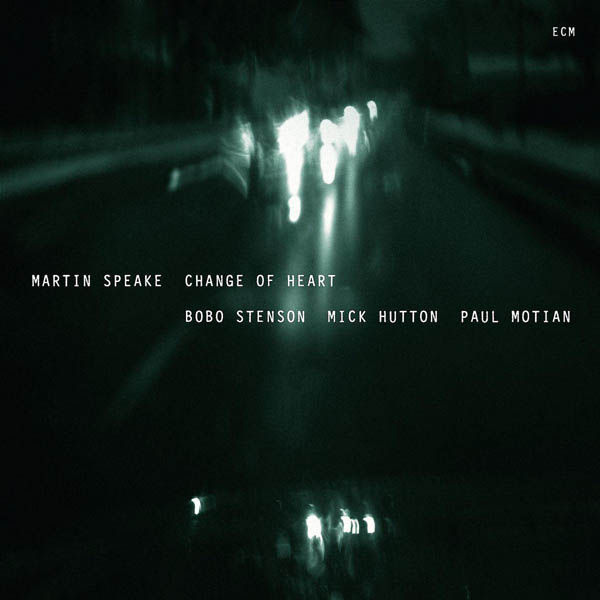 The roots of the “Change Of Heart“ project go back to 1993, when English saxophonist Martin Speake, for many years an admirer of Paul Motian’s music (he has cited Motian’s trio with Frisell and Lovano as his “favourite band in jazz”), sent some of his own work to the great American drummer. Paul responded with enthusiasm, and a tour of Britain was quickly set up, in a new group that included Mick Hutton on bass. The ’93 group played both Speake’s and Motian’s pieces, and excited the press. In The Guardian, John Fordham wrote that, “Speake’s saxophone sound is a mixture of fragile, silvery high-register playing and a plush, flugelhorn-like mid-range, and his momentum has an unswerving resolution of tempo. In these respects, he resembles a Fifties Cool School improviser, but his phrasing represents a far more contemporary chemistry of long zigzagging lines and unexpected resolutions...Motian’s light, impulsive touch lent buoyancy to everything, but the London musicians sounded as if they’d worked with him for years...”.

With a commission to prepare new music for the Cheltenham Jazz Festival in 2000, Speake added Swedish pianist Bobo Stenson to the quartet, shaping material to accommodate Stenson’s conception of jazz, as well as Motian’s. At the time, Speake stressed “the importance of melody, reflection, interaction, and strong grooves in the music. A commitment to genuine improvisation is something that links each member of the band.” Motian and Stenson, who had never played together before, got along so well that the drummer subsequently joined the Swedish pianist’s band, recording with him on the acclaimed “Goodbye” album (ECM 1904).

The quartet made two tours of Britain before heading to Oslo to make “Change of Heart”, under Manfred Eicher’s direction. Inside Speake’s well-crafted compositions, it is the interaction between Stenson’s rolling piano and Motian’s capricious drums that gives the group its unique impetus, but bassist Mick Hutton also has many strong moments - ‘earthing’ the music, providing an emotional undertow, his choice of notes occasionally reminiscent of Charlie Haden. The leader’s acerbic alto hovers over the turbulent waves stirred by his comrades.

Martin Speake, born in Barnet, Greater London in 1958, began playing saxophone at 16, initially inspired by Ornette Coleman. As a writer of jazz tunes he was also influenced by Keith Jarrett. In the early 1980s he was a founder member of the popular and prize-winning saxophone quartet Itchy Fingers (Deutscher Schallplattenpreis, Wire Award, Schlitz Jazz Sounds Prize etc), which toured the world’s festivals and recorded for Virgin – with McCoy Tyner guesting on their first album, and Airto Moreira on their second. He has subsequently worked with Django Bates, Stan Tracey and other figures on the London jazz scene, and recorded ten albums as a leader, spanning a wide variety of styles. Recent Speake projects have included new arrangements of Charlie Parker, duo concerts with Bad Plus pianist Ethan Iverson, and collaborations with Indian musicians.
Bobo Stenson (born 1944) has long since defined the meaning of modern jazz piano in Sweden. Early in his playing career he worked with a line of visiting Americans, from Sonny Rollins to Gary Burton to Dexter Gordon, and had a particularly creative association with Don Cherry, beginning in the 1960s and lasting until the end of the great trumpeter’s life (he appears on Cherry’s final leader date, “Dona Nostra” (ECM 1448). Stenson made his first ECM recordings in 1971: Garbarek’s “Sart” and his own trio album “Underwear”, with Arild Andersen and Jon Christensen. In the mid 70s, the Jan Garbarek-Bobo Stenson Quartet was one of the hottest bands on the European festival circuit and left behind two albums widely regarded as classics: “Witchi-Tai-To” and “Dansere”. In recent years a priority has been his own trio, with albums including “Reflections”, “War Orphans”, “Serenity” (all with Anders Jormin and Jon Christensen), and “Goodbye” (with Paul Motian on drums). For ten years from 1988-1997, Stenson worked extensively with Charles Lloyd (albums: “Fish Out Of Water”, “Notes from Big Sur”, “The Call”, “All My Relations”, “Canto”) and was also a member of Tomasz Stanko’s quartet and sextet (albums: “Matka Joanna”, “Leosia”, “Litania”). Other recent recordings include the album “Parish” with the Norwegian-Swedish group of the same name.

Paul Motian, who celebrated his 75th birthday on March 25th, is of course one of the music’s history makers. His contributions to the groups of Bill Evans, Paul Bley and Keith Jarrett helped to change the course of improvisation. He has recorded extensively for ECM, his discography for the label including nine albums as a leader (the most recent are “I Have The Room Above Her” and “Garden of Eden”), plus discs with Jarrett, Bley, Marilyn Crispell, Charlie Haden, Carla Bley, Pierre Favre and Bill Frisell. Other musicians with whom he has played include Thelonious Monk, John Coltrane, Charles Lloyd, Zoot Sims, Lee Konitz, Martial Solal, Tony Scott, Masabumi Kikuchi and many, many others.

Mick Hutton, born 1956, first recorded for ECM in 1985 with the group First House (featuring Django Bates and Ken Stubbs). In 2001, he contributed to folk singer Robin Williamson’s album, “Skirting The River Road”. In between he has played with everyone from John Surman to Nigel Kennedy and has been closely associated with Speake in many projects. Although widely regarded as the outstanding jazz bassist of his generation on the London scene, Hutton has recently been obliged to abandon the bass: an injury to his left hand has forced him to switch instruments. For the last three years he has been concentrating on playing steel pans and keyboards, mostly in his own ensembles.

Hutton’s current unavailability as bassist, and Motian’s retirement from the road (Paul now plays only in New York City), means that “Change of Heart” is - at least for the time being - the only place to hear this remarkable quartet, making this album all the more valuable as a document...

His alto saxophone voice has some of the cool, intelligent clarity of Lee Konitz, but Speake’s music encompasses more contrasts. While his ideas follow free impulses, his discipline and focus make the eight originals of Change of Heart feel like one sustained fabric of intense reflection. The world-class rhythm section here is Pianist Bobo Stenson, bassist Mick Hutton and drummer Paul Motian. Speake and Stenson often sound like tonal variants of one consciousness, searching together through the diverse connotations of Speake’s tunes, veering into one fresh discovery after another. …
Change of Heart makes a compelling case that Martin Speake is one of the most interesting and rewarding alto saxophonists now playing jazz on any continent. Thomas Conrad, Jazztimes

This is surely Martin Speake’s finest album to date. Everything is right about it – the writing, the choice of personnel, the performances from all concerned, the production. … Moving in and out of time with a constantly shifting pulse, these eight pieces are located on the fringes of abstraction but remain highly melodic at the same time. There’s a warm, reflective and ambient feeling to the record that draws listeners into the musicians’ space and holds them suspended in that world. … There’s no point in singling out particular tracks, as it’s the whole experience that the listener will experience and enjoy. A real and lasting achievement. Duncan Heining, Jazzwise

True to Speake’s and Stenson’s predilections for songlike, lyrical and unhurried playing, this is predominantly a wistful, yearning session with only an occasional diversion into a gallop, notably on the scurrying Barefaced Thieves. But Speake’s tonal subtlety on long notes has an eventfulness of its own, and Motian can impart more rhythmic variety to slow music than almost any other drummer alive. The soft flow of Stenson’s playing on Change of Heart over Mick Hutton’s resonant, Charlie Haden-like bass, Speake’s mix of alertness and receptive stillness, and Motian’s masterly percussion add up to a distinctive … set. John Fordham, The Guardian

Speake has a clear, luminous tone and a penchant for meandering, aching melodies; his pairing with Stenson works effortlessly. Hutton is assured, warm and inventive… Lasting pleasures are to be had within. Peter Marsh, BBC Music Interactive

Martin Speake is something of an underground national treasure and this CD unsurprisingly brims with beautiful passages of alto saxophone playing and group interplay. Chris Sheridan, Jazz Review