Marilyn Crispell: Nothing Ever Was, Anyway 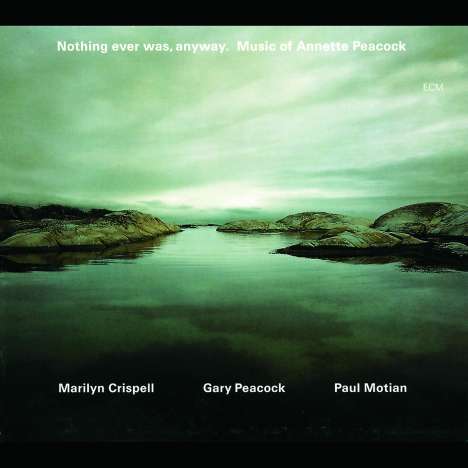 lieferbar innerhalb 2-3 Wochen
(soweit verfügbar beim Lieferanten)
EUR 18,99*
Verlängerter Rückgabezeitraum bis 31. Januar 2023
Alle zur Rückgabe berechtigten Produkte, die zwischen dem 1. bis 31. Dezember 2022 gekauft wurden, können bis zum 31. Januar 2023 zurückgegeben werden.
Versandkosten
+ Gary Peacock, Paul Motian, Annette Peacock
Nothing ever was, anyway, a recital of the music of Annette Peacock, marks the ECM debut of Marilyn Crispell, one of the most accomplished improvising pianists to have risen to prominence in the last two decades. Critic Graham Lock has described her as "the complete virtuoso; the clarity of her touch is astonishing, yet her technique is always at the service of her musical sensibility, the energy shaped by the requirements of the form". In the late 1980s one of Crispell's mentors, Cecil Taylor, hailed her for spearheading "a new lyricism" in creative music. If the surging physical power of many of her performances has deflected some listeners from proper attention to this aspect of her art, it has never been better accented than on Nothing ever was, anyway. Peacock's bare-boned ballads encourage her to sing with a perectly poised admixture of tenderness and strength.

Born in Philadelphia in 1947, Crispell was schooled in classical music, studying piano from the age of 7. Graduating in piano and composition from the New England Conservatory of Music, she came late to jazz, but by 1978 was teaching at Karl Berger's Creative Music Studio. There she met many musicians with whom she has since worked, including Roscoe Mitchell, Wadada Leo Smith, Oliver Lake and, most crucially, Anthony Braxton. Extensive touring and recording with Braxton raised her critical profile and paved the way for numerous albums of her own for a plethora of little labels. Crispell's recordings have ranged from solo improvisations to progammes of Coltrane's music to performances of contemporary composition (by Manfred Niehaus, Robert Cogan, Barry Guy and others). Documented encounters with improvisors have included meetings with Fred Anderson, Evan Parker, Peter Brötzmann, Evan Parker, Charles Gayle, Irène Schweizer, Eddie Prévost, Billy Bang, Tim Berne and the massed cast of the London Jazz Composers Orchestra; she has also recorded with the Reggie Workman Ensemble of which she has been a member since 1986. Her own trios have frequently included drummer Paul Motian. Amongst her influences, Crispell has cited Coltrane, Bach, Webern, Braxton, Cecil Taylor, Sun Ra, Thelonious Monk – and Annette Peacock. In recent years, Peacock and Crispell have been near-neighbours in Woodstock and the pianist has availed herself of the opportunity to study closely some of the subtlest and most compelling-yet-elusive tunes in jazz history with their composer. The results of their collaboration can be heard on Nothing ever was, anyway. Annette Peacock feels that these are definitive performances of her material. Compositions played by the Crispell trio with Gary Peacock and Paul Motian include "Nothing ever was, anyway", "Open, To Love", "Albert's Love Theme", "Cartoon", Blood", "Ending". "Miracles", "Touching", "Both" – all melodies as finely–calibrated as haikus, all little classics of the idiosyncratic genre they define. The composer adds her uniquely daring vocals to "Dreams (if time weren't)".

Annette Peacock was born in Brooklyn, and was self-taught as a musician. At 17, she befriended Albert Ayler (to whom "Albert's Love Theme" is dedicated); Albert's bassist, Gary Peacock became her first husband. Annette accompanied the Ayler group on its first, controversial, European tour, and began to develop the music that would bring new impulses and a new sensibility to the jazz avant-garde. The first public performances of her "free form / free song" music were given by the Jazz Composers Orchestra in Hamburg.

"I chose to go in the direction of ballads, which meant a lot of space," she told Impetus magazine. "It was difficult for players at the time. Drummers would say 'What am I going to play on this'''. Drummers want some motion. A different style developed with the waves, the spaces, and the silences. That was the concept that I worked on exclusively, it was the contribution I made to free music."

For six years, Annette wrote the book for the Paul Bley Trio, providing "environments" – very sparsely-detailed environments – in which the musicians could create something of their own. Gary Peacock and Paul Motian were amongst the first musicians to become adept at working within Annette's structures. Some early results can be heard on Paul Bley With Gary Peacock, the third album released by ECM in 1970. In fact, Peacock's music has been almost a leitmotif at ECM through the decades; the emphasis in her work on silences primed with musical tension, on the power of subtle persuasion, on radical understatement, is very much in line with the label's aesthetics. Critic Art Lange once observed, astutely, that "Peacock's songs invoke intensity through subtraction, favour a whisper over a shout, celebrate simple nuance and complex emotions, conjure echoes of the past with a razor-sharp edge. The songs are exquisitely evocative – able to suggest a mood, whether loneliness or exhilaration, within a very few notes."

If Annette Peacock's songs have become part of the lingua franca of creative music, sightings of the artist herself, on record or in concert, have been relatively rare. Four albums – Dual Unity, Improvisie, Revenge and I'm The One – issued at the beginning of the 70s, made revolutionary use of Peacock's dark voice in tandem with synthesizers, I'm The One, in particular, attracting the interest of the rock world. She recorded with drummer Bill Bruford, then resumed her solo career, after a long hiatus, with X-Dreams. in 1978. The Perfect Release, Sky-Skating, Been In The Streets Too Long, I Have No Feelings and Abstract-Contact followed. For most of two decades, Peacock was based in England, occasionally playing low profile gigs, often alone at the piano, sometimes in the company of free improvising drummer Roger Turner. In 1995 she surfaced briefly at jazz festivals fronting a trio with Evan Parker and Barre Phillips. Now back in the United States she is currently writing new material for a forthcoming ECM project.

Both bassist Gary Peacock and drummer Paul Motian have recorded extensively for ECM, and were last heard together on Keith Jarrett's At The Deer Head Inn. Peacock's Tales of Another (1977) introduced what has since become the most popular piano trio in contemporary jazz, Jarrett's "Standards" Trio (also featuring Jack DeJohnette), which has to date issued 13 albums, including the prizewinning 6-CD set At The Blue Note. Peacock's dates as a leader also include December Poems (with Jan Garbarek), Shift In The Wind (with Art Lande and Eliot Zigmund), Voice From The Past-Paradigm (with Garbarek, Tomasz Stanko, and Jack DeJohnette), Guamba(with Garbarek, Palle Mikkelborg, and Peter Erskine) and Oracle (with Ralph Towner). He also appears on ECM recordings with Paul Bley, John Surman, Bill Connors and Markus Stockhausen. Peacock's discography additionally takes in sessions with Bill Evans, Gil Evans, Albert Ayler, Don Cherry, Jimmy Giuffre, Tony Williams, Lee Konitz and many others.

Paul Motian made history as a member of Bill Evans's groundbreaking trio with Scott LaFaro. He has also played with Lennie Tristano, Coleman Hawkins, Thelonious Monk, Charles Lloyd, John Gilmore, Pharoah Sanders. Motian made his ECM debut – and his first album as a leader / composer – with Conception Vessel in 1972; sidemen included Keith Jarrett, Charlie Haden and Leroy Jenkins. As a member of Jarrett's "American Quartet", Motian played on the critically-acclaimed The Survivors' Suite and Eyes Of The Heart. Leader dates for ECM include Tribute (with Carlos Ward and Haden), Dance (with Charles Brackeen and David Izenzon), Le Voyage (with Brackeen and J. F. Jenny-Clark), and It Should Have Happened A Long Time Ago (which introduced the Motian / Bill Frisell / Joe Lovano Trio, still playing together after 13 years). Motian can be heard, furthermore, on ECM recordings by Charlie Haden, Bill Frisell and Paul Bley.