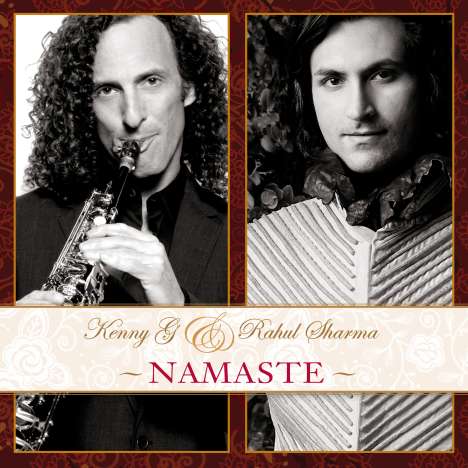 When the elements of melody and harmony are carefully balanced, the convergence of one world with another results in a beautiful sound.

Namaste is a collaborative album crafted by Rahul Sharma - a native of India's Kashmir region and a third-generation master of the exotic, 100-string santoor - and saxophonist Kenny G, a multiple Grammy-winning titan on the contemporary jazz landscape for more than two decades. This unusual and daring project captures the best of these two musicians - with a chill ambiance set up by mixer / producer extraordinaire Kid Tricky, (along with Walter A. and Soul Seekerz) - is set for release by Concord Records.

The evolution of Namaste is a fascinating story of two artists transcending cultural boundaries, beginning when Sharma, who first learnt the santoor from his father the legendary santoor maestro Pandit Shiv Kumar Sharma, approached saxophonist Kenny G during the latter musician's performance in Mumbai a few years ago. Sharma, who has developed a substantial domestic and international following since the late 1990s via more than 50 studio recordings and extensive touring, introduced himself to Kenny by presenting him with a few of his CDs during his visit. Some informal discussions ensued, and an idea quickly took shape to collaborate on a studio recording by emailing music files back and forth from opposite ends of the globe and two very diverse musical perspectives.

The result was Namaste India, released in India in 2011, a collection of seven tracks that were deeply rooted in the traditions of Indian folk and classical music, but were also finely embellished with saxophone solos and accompaniments of an unmistakably Western orientation. As musical and cultural marriages go, it was a thing of beauty.

"It was an experiment to see how the santoor and the saxophone would work together," says Sharma. "I knew Kenny would add so much to the compositions. But when I listened to the final results, I thought, ‘Wow, this is even better than I expected.' The way he ended many of the tracks with a few simple notes was such a beautiful complement to the entire composition. He would improvise in a way that was so unexpected, and then find a way to fit it back into a melody that wasn't typical of the kind of music he has recorded in the past."

Kenny G, for all of his artistic and commercial success over the past two decades as a composer and an improviser, admits that working his way into Sharma's tracks was no routine task. "It wasn't the usual formula of playing the melody, improvising, repeating the melody, and then doing an ending," he says. "It was more a question of ‘Where do I fit in? What notes do I play that will best serve this piece of music?' But it was fun. It was an opportunity to just experiment with the sounds and notes and phrases. Little by little, over the course of several months, we put together the first few songs, and we realized, ‘Hey, I think we have something going here...'"

John Burk, Executive Vice President of A&R at Concord, was immediately taken with the album's seductive world beat, but wondered whether there might be a way to enhance the overall set with a chill mix to bring the subtle backbeat slightly more to the forefront without losing the music's inherent mystical essence.

Enter mixer / producer Marc Burrows, also known as Marc JB of the UK dance music group Bimbo Jones, and operating on this project in the alternate guise of Kid Tricky. Burrows reconfigured the entire album with a shade more rhythmic presence, and isolated a couple songs - namely the title track and the otherworldly "Transcendental Consciousness" - for a full remix. "In some ways," says Burk, "the album is actually a three-way collaboration - mostly between Kenny and Rahul, but with a little bit of additional production from Kid Tricky."

The set opens with Kid Tricky's remix of "Namaste," a track that walks a fine line between a hypnotic Eastern groove and the melodic solo lines and accents crafted by Kenny's tasteful sax work. The entire track is underscored by a rhythmic beat that carries the song without being overly obtrusive.

In "Brahma Vishnu Shiva," Sharma sets up the kind of rich foundation that only 100 strings can provide, but the arrangement allows plenty of room for the saxophone to deliver a well-balanced counterpoint to the santoor.

Further in, "Lotus Lovers" opens with a gentle but persistent combination of drumbeat and shimmering keyboards - a configuration that serves as the backdrop to a pleasant and engaging conversation between Sharma and Kenny. Kid Tricky inserts a slightly offbeat rhythm underneath "Valley of Flowers" that forces the listener to engage with the song even before the saxophone and santoor come in.

"Om Shanti" borrows riffs, vocal chants and other elements from two earlier tracks - "Namaste" and "Brahma Vishnu Shiva" - and weaves them into a hybrid piece that is familiar and yet new at the same time.

The album closes with remixed tracks that don't appear on the original Namaste India, including a stirring version of "Transcendental Consciousness," as reimagined by Walter A, and a rendition of the tile track remixed by the Soul Seekerz.

Indian music and contemporary jazz saxophone piped through chill mixes may seem like a gamble, but Namaste comes with a significant payoff. "At first it seemed like an odd combination," admits Burk. "But then we listened to it and we realized that it was two great masters of their respective instruments getting together and doing something very innovative and even very daring. And it's going to force people to hear Kenny in a way they may not have heard him before. This record provides a fresh glimpse of his versatility that sometimes gets forgotten in the shadow of such major success."

But regardless of his own range and versatility, Kenny knows that there's always more to be learned by taking chances and reaching across cultures. "I think the most important thing to come out of this project is the idea that two musicians from very different backgrounds with two very different instruments can find common ground and really make something innovative and interesting in the process," he says. "We each just spoke our own languages to each other, and in the process we developed a language of our own. In the end, we figured out how to make something very intriguing and beautiful.